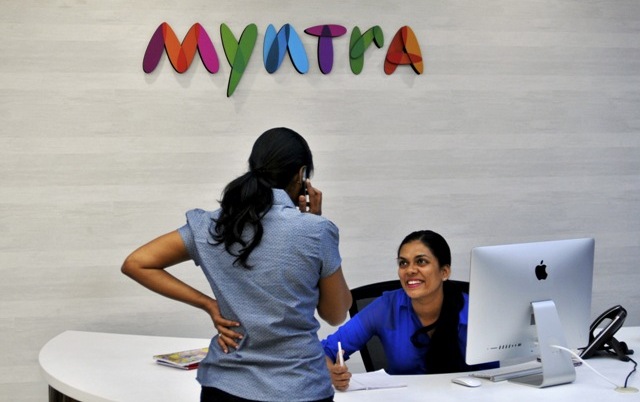 22 May, 2015
Print this article Font size -16+
Myntra became the first company in the world to focus on a complete "mobile-app" business model on Tuesday (12 May). This means they will integrate 50,000 strong supplier base with millions of customer interactions on a real time basis.

Mukesh Bansal, the founder of Myntra, said that since 90 per cent of their traffic was coming from mobile phones it was  "natural" to focus on an "app" only strategy. This move also opens the door wide open to acquisitions, in the startup section, because Myntra is looking at acquiring companies that can build consumer related mobile experiences based on analytics and image compression technologies. Recently they acquired startups Fittiquette and Native5, for an undisclosed sum, which will enhance Myntra's app experience. "When we talk mobile experiences it is the power to take a selfie, posted on the app, and use data analytics to suggest the right fashion," says Shamik Sharma, Chief Technology and Product Officer at Myntra.
The Myntra team announced on the sidelines of the press conference that they may double their technology teams headcount to 600 people. But that would only happen on a need only basis. Currently the team has employed 300 members. Myntra's gross merchandise volume will cross the Rs 2,400 crore mark based on current estimates. The value proposition is to build a $5 billion business around the app in five years and we will get to profitability in two years," says Mukesh Bansal, Chief of Mobile Commerce at Myntra and is also on the board of Flipkart.
Flipkart is clearly trying to hive off Myntra to a premium proposition and will use the fashion tag to experiment with the app strategy.
"Statistics tell us that 90 per cent of the total internet time, in India, is accessed from the mobile," says Sachin Bansal, co-founder of Flipkart. He adds that one cannot ignore this phenomenon and that is better to be the first mover in terms of an app strategy. Meanwhile he also stressed on the fact that Flipkart would not jump in to on a mobile app only strategy because of the vast variety of product categories that they offered.
"The Myntra app will eventually pave way to the internet of things as a platform for selling products," says Mukesh Bansal. He adds that the technology needed to target consumers then would include a variety of technologies starting from video to voice. The current app for example allows friends to enter the app together and shop products by sharing items of interest on the go.
Gartner predicts that there will be 800 million smart phones in India by 2020. But there is a catch here the total organised workforce in India is only 30 million, out of 450 million workers. Of this set only 12 million are regular private corporate employees and only 60,00,00 people are being added to this set year on year. 12 million is still a big number. Analysts add that it is a big bet for Myntra to go in to an app only strategy because the country still has no local language content to connect with majority of smart phone users and perhaps has to invest in image technologies to get people involved in buying the app.
According to Ernst & Young the apparel market is $50 billion (Rs 35,000 crore) in size and is set to double in five years. If the app caters to at least 10 percent of this, then it would become the largest fashion company in India. However today the largest fashion retailer in the country was created this month with the merger of Aditya Birla Nuovo and Pantaloon Retail, which created a Rs 12000 crore business with over a 2000 store spread across the country.
The move also completely moves the digital budget from a search oriented and key word based advertising spends to working with adtech companies that can target consumers. These companies will serve Myntra ads on various other apps based on consumer insight, which means Myntra must share unique mobile data with these adtech companies or even with Google and Facebook, which are working on deep linking technologies that can move the customer from one app to the the Myntra app on clicking the advert.
Again Flipkart, with its Myntra platform, takes the first charge on setting the bar in the mobile commerce industry by pushing its vendors, merchants and consumers to be connected on seamless supply chain and consumer engagement platform, which in effect is the front facing app. If it succeeds it is a gold mine for Mukesh and team. If it does not it is still a great bet for the long run.
Tags assigned to this article:
vishal krishna internet myntra othertop1