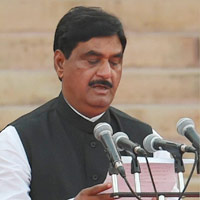 08 November, 2014
Print this article Font size -16+
Union Minister Gopinath Munde's death cast a shadow over the first day's sitting of the Lok Sabha which adjourned for the day after paying homage to the departed leader.

Proceedings of the House began on a sombre note, after the national anthem was played out, with Protem Speaker Kamal Nath condoled the death of Munde, whom he hailed as "man of the masses".

Immediately after meeting for the day, Nath said the new Lok Sabha "charged with great and heavy responsibilities for the welfare of the country and our people has been elected under the Constitution".

The House, then, observed silence as per tradition.

Nath sought the sense of the members on whether to take up the oath taking exercise tomorrow. As the members agreed, Nath postponed the exercise for Thursday (5 June).

Before adjourning for the day, the House observed silence for two minutes as a mark of respect to Munde.

The Lok Sabha bulletin said that in the wake of Munde's death on Tuesday (3 June), his seat has fallen vacant.