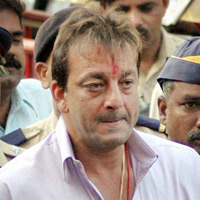 08 November, 2014
Print this article Font size -16+
Bollywood actor Sanjay Dutt will have to undergo a jail term of more than three years after the Supreme Court on 21 March upheld his conviction in the 1993 Mumbai serial blasts case which it said was organised by underworld don Dawood Ibrahim and others with the involvement of Pakistan's ISI.

Yakub Abdul Razak Memon, brother of absconding accused Tiger Memon, is the sole convict who was awarded death sentence by the Supreme Court in the 1993 Mumbai serial blasts case that had claimed 257 lives and left 713 injured.

The capital punishment of the other 10 death row convicts was commuted to life sentence by a bench of justices P Sathasivam and B S Chauhan which also upheld the life term awarded to 16 out of 18 convicts.

The apex court reduced to five years the six year jail term awarded to Sanjay Dutt by a designated TADA court in 2006, ruling out his release on probation because the "nature" of his offence was "serious".

53-year-old Dutt, son of famous bollywood couple late Sunil Dutt and Nargis, has already spent one and half years in jail and was out on bail. Sunil Dutt was a long standing Congressman and was a Union Minister.

Dutt was convicted by the TADA court for illegal possession a 9 mm Pistol and a AK-56 rifle which was part of the consignment of weapons and explosives brought to India for the coordinated serial blasts that killed 257 people and injured over 700.

Bringing to a closure the appeals by the convicts and the state in the case, a bench of justices P Sathasivam and B S Chauhan upheld the death sentence of Yakub Abdul Razak Memon, brother of one of the absconding main conspirators Tiger Memon and life sentences of 16 of the 18 convicts.

The death sentence of 10 others was commuted to life sentence by the court which directed that they will remain in prison till death.

The life sentence of one Ashrafur Rehman Azimulla was reduced to 10 years while Imtiyaz Yunusmiya Ghavte was set free by reducing the sentence to jail term already undergone.

"The circumstances and the nature of the offence is so serious that we are of the view that he (Sanjay Dutt) cannot take the benefit of provisions of the Probation of Offenders Act to release him on probation," the bench said.

"We reduce the punishment of six years to minimum of five years under the Arms Act," the bench said and directed him to surrender within four weeks. .

The apex court upheld the death penalty awarded to Yakub Abdul Razak Memon, a chartered accountant by profession and brother of absconding accused Tiger Memon, by the designated TADA court.

The bench said Yakub Memon was the "driving force" and had played a key role in the conspiracy which "warranted death penalty".

While commuting the death sentence of 10 others to life, the bench said they were people of low strata in the society and were without any regular job and had fallen prey to the main conspirators for their "hidden motives".

The court noted they were the planters of the explosives and they could not be exonerated for the offence.

It also rejected the contention of Mohammed Moin Faridulla Qureshi, a life convict, seeking discharge from the case on the ground that he was a juvenile at the time of the offence.

While denying any relief to Qureshi under the Juvenile Justice Act, the bench said he was convicted under Terrorist and Disruptive Activities (Prevention) Act (TADA) which is a special law dealing with special category of persons-- terrorists.

"Therefore, there is no need to apply the law relating to juvenile and we are confirming the life sentence awarded to him," the bench said.

It said Yakub Memon and all absconding accused (Dawood Ibrahim, Tiger Memon and others) were "archers" and rest of the accused were "arrows" in their hands.

The life sentence of Ashrafur Rehman Azimulla was reduced by the court to 10 years while that of Imtiyaz Yunusmiya Ghavte to jail term already undergone.

The apex court said Pakistan-based intelligence agency ISI was also involved in the 1993 blasts and the accused were trained in Pakistan.

The court, on perusing the evidence, said large number of convicted and absconding persons received training in making RDX and using automatic weapons like AK-56 rifle and hand grenades in Pakistan.

Confessional statements of the accused makes it clear that the management of training was under the hands of Dawood Ibrahim and others, the bench said.

It also observed that unfortunately some police officials were also actively involved in the smuggling of explosives.