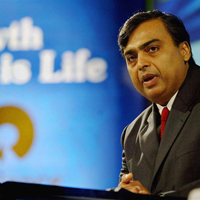 08 November, 2014
Print this article Font size -16+
In his third 'expose', activist-turned-politician Arvind Kejriwal has accused Congress and BJP of working for the industrialists. Kejriwal, has already attacked Congress president Sonia Gandhi's son-in-law Robert Vadra for his alleged business links with DLF and BJP chief Nitin Gadkari over the issue of corruption.

Kejriwal also questioned Reliance Industries chief Mukesh Ambani for his role in influencing Congress party's decisions.  In support of its allegations, India Against Corruption ( IAC) also played two audio clippings that it claimed involved conversations between corporate lobbyist Nira Radia and Atal Bihal Vajpayee's son-in-law Ranjan Bhattacharya.
Reliance Industries denied Kejriwal's charges, saying the allegations were made at the behest of vested interests.
IAC alleged that Reliance Industries was favoured in the structuring of the KG basin deal and in the modifications that were made thereafter. Kejriwal cited the CAG report on the KG basin deal and alleged that the motivated structuring of the contract between Reliance Industries and the government could cost the exchequer up to Rs 1 lakh crore.

Calling it a "classic case of crony capitalism", activists Arvind Kejriwal and Prashant Bhushan alleged that Reliance was "blackmailing" the government to increase the price of gas by "almost stopping" the production and indulging in "hoarding like petty traders".

Attacking the decision to shift S Jaipal Reddy from petroleum ministry, they alleged it was now "absolutely crystal clear" that he was eased out of the crucial ministry only on account of "pressure" from Reliance Industries.

They said Reddy was "honest" and his "ouster" was only because he "actively resisted" Reliance' demand for an increase in the price of gas and wanted to penalise the company for "wilful reduction" of production of gas.

Prashant Bhushan said that the 31 October expose is based on the Niira Radia tape conversation. The India Against Corruption website,  spelt out how both the Congress and BJP are in Ambani's pocket.

According to the IAC press release, Reliance Industries Ltd (RIL) has the contract to extract oil from KG Basin. Under an agreement of 2009 with the government, they are supposed to sell gas at $ 4.2 per mmBTU upto 31st March 2014. Midway now, RIL is demanding that the price be increased to $ 14.2 per mmBTU. Jaipal Reddy resisted that and he was thrown out.
IAC said RIL signed a contract with NTPC and RNRL to supply gas for its power plants at $2.34 per mmBTU; however, RIL went back on its word. It also accused that under RIL's pressure, EGoM headed by then finance minister Pranab Mukherjee revised the gas price to $4.2 per mmBTU. It said by doing this the EGoM gave an undue benefit of Rs 8000 crore to RIL.

While talking to reporters, Kejriwal said that in 2006, Mani Shankar Iyer was removed and Murli Deora brought in to increase RIL capex from $ 2.39 billion to $ 8.8 billion and to increase gas price from $2.34 per mmBTU to $ 4.2 per mmBTU.

"In 2012, Jaipal Reddy had been removed and Moily brought in to increase gas prices from $ 4.2 per mmBTU to $ 14.2 mmBTU and to condone RIL's blackmailing of reducing gas production," he said.

"Huge benefits given to RIL in last one decade despite flagrant violations of various agreements by RIL. Benefits to RIL causing serious price rise in the country."

He also said: "Both BJP and Congress involved. BJP signed a sweet deal with RIL in 2000. Congress faithfully implemented it."

Moily Dismisses Comments
Oil Minister Veerappa Moily refused to comment on the allegations by IAC. “I won’t react to Arvind Kejriwal, have better things to do”, he said. Coal Minister Sriprakash Jaiswal was one of the first to react to the explosive press conference. “ In a democracy, a person is free to level any kind of allegation”, he said. Meanwhile BJP spokesman Mukhtar Abbas Naqvi has dismissed the expose altogether, saying that the IAC was simply repackaging old stories.

However BJP leader Jaswant Singh Jaipal commented on the alleged reasons behind removing Reddy saying, “Reddy was removed because he was ‘inconvenient’? Have corporate interests taken precedence over national good?”
India Against Corruption's main allegations:
IAC say RIL substantially reduced its production of natural gas to pressurise the government. Total consumption of natural gas in the country is 156 mmscmd. According to agreement, RIL was supposed to produce 80mmscmd (more than 50 per cent of the total demand) from 2009."

"In any business, increase in costs means decrease in profits. However, the NDA government, signed a contract dictated by RIL wherein an increase in cost by one rupee meant additional profits of RIL by almost Rs 2.2," IAC alleged. According to IAC an parameter called 'Investment Multiple' has been defined in the contract as being the ratio between the Total revenue and Total investment.