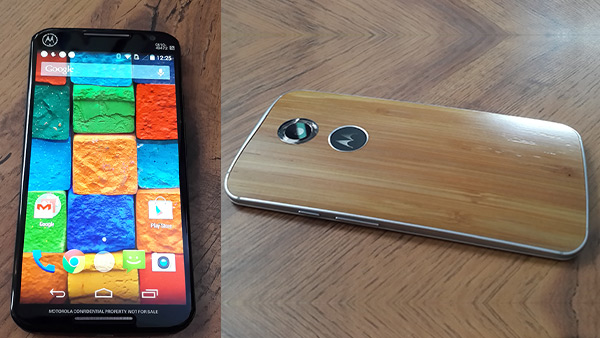 08 November, 2014
Print this article Font size -16+
Charlie Tritschler, Senior Vice President Product Management at Motorola, is delighted with his company’s success in India. Barely a year after Motorola launched its Moto series smartphones in India, sales have notched up to 1.6 million devices. So when it was time for upgrades all around, Motorola had no hesitation launching the new versions of the Moto G and Moto X in the country, with the Moto 360 smartwatch accompanying the phones.

The Moto G, Motorola claims, is the best selling phone the company has ever had and they peg it down to the price-performance equation. The most significant upgrade to the Moto G is the display, a 5.0-inch 720p IPS HD display. It certainly looks good and the larger phone is still very nice to hold. The white version has a clean matt finish back and this time around, supports an SD card slot. Other specs are also bumped up. There’s now an 8MP main camera and a 2MP front camera. Sound is much better because of two stereo speakers on the front. There’s 16GB of internal storage and a 2070mAh battery – that part is not an upgrade. The processor is also still the Snapdragon 400 1.2GHz.

The Moto G runs on pure Android and gets upgrades “faster than Google,” sometimes.

The Moto G is of course, the middle of the series so far, the Moto E being the absolute entry level (and not included in the new upgrades so far) with the Moto X at the top end of the food chain.

The good news for Indian consumers is the price which is Rs 12,999. Charlie Tritschler spoke of how Motorola knew well that consumers in India expected a certain pricing and said that Motorola was not about to disappoint in a market which has become increasingly important to the company. As for threats from Chinese companies like Xiaomi which recently entered the Indian market with dramatic flair, he said that Motorola was going to continue to execute its strategy regardless and that it was confident of delivering value and not running out of stock. The Moto G is available already on Flipkart, and includes promotional offers such as 100 per cent cash back for 100 customers through a lucky draw.

The Moto X is not yet available and nor is there a price announced, although it will be on sale later this month on Flipkart. Did Motorola not want to move beyond Flipkart and get to target segments who were not online, specially in smaller towns and cities? Charlie Tritschler said that Flipkart was growing rapidly and that using other distribution channels would only prove costly. In time, customers would manage to buy online.

The Moto X, an interesting phone to begin with, doesn’t skimp on new specs. The display is now up from 4.7 to  5.2 inches of 1080p resolution with 423 ppi density and looks bright and vivid with vibrant colour representation. It runs on a Snapdragon 801 quad core processor clocked at 2.5GHz and has 2GB of RAM. While there are smartphones with higher specs than these, the clean and unfettered use of Android on the device makes it perform smoothly – visibly so. Android 4.4.4 will upgrade readily to future versions.

Charlie Tritschler says that Motorola studied in detail what customers wanted further in the Moto X and just went on to put in those features. The camera is now a 13MP with a fast shutter speed, tap to shoot, and features like best shot which is suggested when the camera takes additional information from before and after the shutter release. An easy selection in the gallery lets users make collages with photos and videos and set them to music. On top of all that, the camera can shoot 4k video.

The Moto X is slim and svelte and easy to hold. It looks premium with its metallic skirting. There’s a bamboo backed version for those who want real wood on their phone.

But Motorola has done more than just bump up the specs and fine tune the design. The Moto X original was the first to include the responsiveness to an OK Google, waking up from total sleep, ready to take a command even when elsewhere in the room. Now, in the new Moto X this has been taken to the next level. There are four microphones to catch the sound better and you can interact with the device much more via voice. With Google enhancing work with Indian accents, this is now easier, including commands to call contacts with Indian names. There are other commands such as “take a selfie” which will wake up the phone and go to the front camera to do just that.

The Moto X is also taking in some features that are contextual, perhaps a cue from Google Glass and smarwatches. The phone will sense or figure out what you’re doing such as driving, about to sleep etc and do things like read out text or shut off sounds. Other than Moto Voice and Moto Assist, as these features are called, you also have Moto Display and Moto Actions, which presents all sorts of information and tasks on the lock screen such as when you move your hand over the screen, so that you can save battery. These tasks are actionable. Notifications show up in this way too and you can actually see them without a full wake-up of the phone.

The Moto X also has a fast charger, and that should be welcome considering the battery is only a 2300mAh.