Most Top-selling Drugs In India Come From MNCs 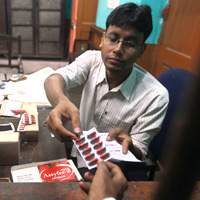 08 November, 2014
Print this article Font size -16+
Multinational drug companies may not have grown in the country like some of the domestic drug companies like Cipla, Lupin or Sun Pharma have managed to do, but the top selling drugs in India still belong to the MNCs.

GlaxoSmithKline's Augmentin, an antibiotic used to treat bacterial infections is the largest selling drug in the country with sales of Rs 294.2 crore for the 12 months ended May 2013, data from IMS Health says.

The second and third largest selling drugs in the country are Pfizer's Corex and Abbott's Phensedyl — both cough and cold preparations — with sales of Rs 286.2 crore and Rs 282.6 crore respectively. The fourth largest selling drug also belongs to a multinational company — Novartis India's Voveran (RS 263 crore) which is used as an analgesic to treat pain and inflammatory disorders. Novo Nordisk's insulin brand Human Mixtard is the fifth largest selling drug with sales of Rs 261.1 crore for the same period. The next two spots are occupied by drugs produced by two domestic companies — Aristo Pharmaceuticals' Monocef which is used to cure typhoid and Bangalore-based Ayurveda company Himalaya's Liv-52, which claims to protect the liver against various hepato-toxins. Liv-52 is also the fastest growing among the top ten brands for the 12-month period, with 29.9 percent in terms of value growth.

IMS Health tracks the sales of pharmaceutical drugs in the country sold through the stockists and distributors.

For the period MAT (Moving Annual Total) May 2013, IMS Health reports the pharmaceutical market has grown to Rs 74,117 crore, with a growth of 10 per cent, over the same period last year.