More Than The Sum Of Parts 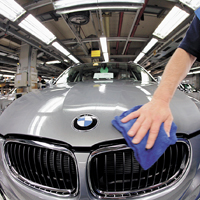 If the proposed new definition comes into force, luxury automakers in the country such as Mercedes-Benz, BMW, Audi, Harley Davidson and some other high-end car and bike makers, which import core components described above for assembling their vehicles, will be compelled to pay 60 per cent import duty, up from the current level of 10 per cent. Add taxes and other charges, and that would put cars currently treated as CKD on par with imports of entire cars.

Luxury automakers and the automobile industry association Society of Indian Automobile Manufacturers (Siam) are huddling together to get some further clarity on the proposed definition of a CKD vehicle. Analysts say that the current manufacturing platforms that the foreign companies have invested in will have to be overhauled if the newly defined CKDs and the imported cars are sold at the same price in India.

The hike in duty could result in a steep jump in the price of the likes of BMW's 3 series, 5 series and the recently launched X1, Audi's A4, A6 and Q5 and Mercedes' C-class and E-class. High-end bike makers Harley Davidson, Ducati and Kawasaki, which are start-ups in India, will also be hit.

"Our recommendations on the challenges the new definition will pose have been made, which we hope the government will consider favourably," says Siam director-general Vishnu Mathur. But he refuses to give details.Luxury car manufacturers are seeking their own remedies. "We are seeking clarification from the authorities regarding the revised definition of CKD. Once we receive the required information we will evaluate internally on a case-to-case basis and prepare a final assessment of the situation," Mercedes-Benz India says in an emailed response to our queries.

Honda — which manufactures all cars under its India portfolio apart from the Accord V6 locally, is waiting for a response from Siam on the issue before taking any action, according to a spokesperson for Honda Siel Cars India. BMW India and Toyota Kirloskar Motor declined comment until later.

If the budget proposal is approved, the total duty including the value added tax (VAT) component would increase to 110 per cent, making luxury cars dearer by Rs 6-7 lakh, says Hitesh Goel, analyst at Kotak Securities.

The timing of the proposal is crucial, too. The luxury car market in India, which contributes about 1 per cent to total car sales in India, is growing at a rate of over 40 per cent annually. The new rules will upset the pricing strategy of these car makers, and impede the growth trajectory of this segment.

The government's objective is to create value additions, and the industry shares this objective. But it is not economically viable for these companies to localise manufacturing when they are selling in small numbers, Mathur says. However, it needs to be seen how these automakers — for whom India sales figures contribute much less to their global sales — react to this proposal if it takes form. Your dream to own a luxury car may stay in neutral mode for some time.