More On The Note 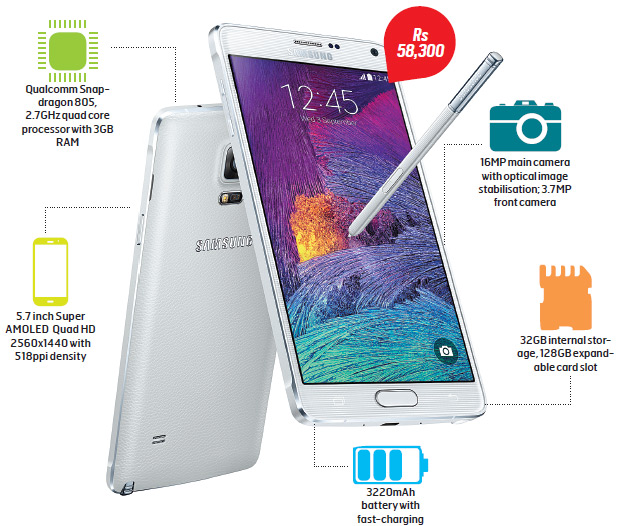 02 December, 2014
Print this article Font size -16+
First off, a dis- closure: I’ve been a Note user from the very beginning of the series and the unit I’m reviewing is my own. Deviating from the usual review pattern, I thought I would give a personal perspective since I’m intimately familiar with this big smartphone. Reading between the lines, you will be able to see whether the device will suit your needs — or not.

To begin with, the flabbergasted reactions when people around me figured out I’d bought the Note 4, first day, first show. “What’s wrong with your Note 3?” or “Why are you spending that hefty amount all over again?” and “Why can’t you wait?”And, of course, “Are you crazy?”

Nothing serious was wrong with my Note 3, except for the expected slowness that comes with Samsung’s TouchWiz, my collection of over one hundred apps, and plain ol' passage of time. As for why I couldn’t just continue with it or wait, I can only say in my defence that I use the device my entire waking time, with the laptop being increasingly neglected. And so, any improvements in the experience were desirable to me. If I were just taking calls, occasionally surfing or not using 90 per cent of the features, I may have thought twice.

And so, buy it I did, not waiting for the price to drop and not denying myself the special case that goes with the Note 4. What won me over the most was the increased functionality of the S-Pen, and the camera. There was so much else, but these were the deal breakers for me.

Others though, are very pleased with the new direction in design that Samsung has taken. Now there’s nothing cheap about the way the Note 4 looks and feels. It’s solid, well-built and has a glinting metal trim around the edges that gives it the high-end look it deserves. As for myself, I admire the design to start with and then put the phone in a case and forget all about its appearance as I’m far too busy using it.

That’s the thing about the Note series, and specially the Note 4. It’s a real user’s phone. If you’re intimidated by features and can’t understand why phones should be complicated, give this one a miss.

Even though I live with the Note, I am finding the new one less intuitive and filled with endless features to explore, an activity I may well take my time over. If you’ve been a Note 3 user, it’s not like you will find everything where you left it on the previous device. Many tweaks and changes have been made and it takes involvement to get to the things you want.

To head instead to the things I like most, the S-Pen really does feel much better than that on the Note 3. It can hardly feel like writing with a real pen on paper, but it’s getting close and the control is hugely enhanced because of increased sensitivity to more pressure levels. So, I got my nice handwriting back. Rather than feeling like slip-sliding all over the glass screen, I actually feel like I’m in command of the thin stylus.

Back in my childhood, my father would pass on some of his incredible calligraphy skills to us, and I was delighted to be able to try a bit of amateur calligraphy once again using the two pen styles meant for this. Yes, you get that nice thick-and-thin strokes making the writing look quite arty. There are other pens and pencils and even a highlighter mode.
The S-Pen is a bit of a marvel because of the amount of functionality Samsung has put into what could have been just a writing implement. You can now use it as a sort of mouse, selecting text and other items much more easily. You can write on a screen and instantly share; it is very useful with photos and with things you need to explain to people. You can use it to navigate, scroll and clip content. Apps like Samsung’s Note taker, memo app and scrapbooking and sketching applications use the S-Pen to the hilt.

The other thing that excited me, being an avid phone photographer, was the camera. Whatever has been done to it, the primary camera now takes detailed and sharp photos, not doing too badly in the low light department either. Shots taken outdoors can be stunning. And they look gorgeous on a screen that’s itself stunning, though it isn’t the only one with that resolution.

The Note 4’s camera is, like everything else on the phone, feature filled. You now have optical image stabilisation for better pictures and video. You have manual controls and a realistic HDR mode. The colours are strong, typical of Samsung. Video is smooth and includes several modes such as slow motion (as before) which is currently being fussed over on the iPhone 6. But only a true comparison of the feature will show which one does the job better as some choppiness on slow videos has been reported on the Note 4.

Since the selfie can hardly be forgotten, there’s a trick to taking a 16MP self portrait with the main camera by trying to position yourself on the frame meant for this and smiling by the time the auto timer goes off.

The rear camera isn’t bad either and allows for wide selfies and has all sorts of air brushing etc., to make people look better. You can take a picture by putting your finger on the heart rate sensor on the back and then lifting your finger away, triggering the shutter.

As I’d said, I use the Note to the hilt and that’s because larger screens like the one on this device have meant one can do much more. It’s very much a computer, in a sense. The processing chops on the Note 4 are currently the most powerful on a phone and so, of course, it works fast. But Samsung’s own interface, TouchWiz, the differentiating look and features the software offers, has always been a bit clunky and lag and slowness tend to show over time.

Even though it’s a lot better than before, I’m encountering the odd problem. Implementation of the Flipboard-based magazine app, Briefing, for instance, is stutter filled and far from smooth. Other software features are quite clever and innovate. For instance, you can pull from the corner of the screen to reduce the size of supported apps, making them usable with one hand and also turning them into multi tasking windows. There are a number of these tricks.

In terms of hardware, however, it’s tough to argue with the Note 4 as it handles heavy tasks easily. I didn’t notice any significant heating up and I do use it for long hours. The battery, a 3220mAh, isn’t a significant step-up from before but I find the consumption considerably improved over the Note 3, which I was draining out at a rapid clip from day one.
The ultra power saving mode included on the Note 4 is truly useful, not only to get the most from the last bit of battery juice but to enable the mode for some hours when you expect not to be using the device much. A fast charging feature tops it back up to full in an hour and a half.

The Note 4 is a powerful device meant for the power user and I’d say it’s more of a Samsung ‘flagship’ than the S5 or any of its other devices. Because of this label, it competes with the iPhone 6 Plus, the Sony Z3, HTC M8 and the LG G3, but in terms of uniqueness, it has enough to stand out from the rest.
break-page-break
Harmon Kardon Esquire
This time around we’re looking at a portable speaker that would fit on your office table as much as it would in your bedroom, on the go, or anywhere for that matter. The Harmon Kardon Esquire looks like high-end gadgetry — and going by the price, Rs 19,990, I suppose it is. Does everything about this speaker match up to the price? Well, yes, I would say so, but I don’t think it would have hurt to bring the price down to around Rs 15,000.

The Esquire, which has been around for a few months, does look premium, and that’s from the very first glance as you lift it out of its box. The back is leather finished but strangely, that part gets hidden when you put the speaker down for use. The top has the speaker grill, and all around, there’s a nice high-tech metallic trim. It’s got substantial weight to it, which I find rather reassuring. It’s surprisingly loud for a device that size. There’s no distortion at high volumes and my bass-loving fellow countrymen will be pleased at the base — not so much as to be pounding, but just enough to give the sound some fullness and heft. The base isn’t at the cost of higher frequency sounds either, so you get a nice mix. Predominantly though, it’s loud. The speaker, which is an “executive portable wireless” going by the label, is optimised for voice.

The Esquire is a Bluetooth and pairs with your phone or tablet instantly. Also via NFC. But other than music, it has also got another trick up its sleeve. It has two microphones and can be used for a nice conference call. A small room and a small group can use the device for this purpose easily. You can also use it to take calls if you’re playing your music through a phone and a caller interrupts. It’s nice and clear. Compared with the Bose SoundLink, which is considerably cheaper, the Esquire is worthwhile for anyone who plans to do a lot of conference calling, justifying the price difference.

Buttons on the Esquire are simple enough. Bluetooth, volume, power on, pause, mute, go to phone. You can spread your palm over it when it’s lying down — that’s about the size of it. It’s got a great multi-USB charger and plugs, perfect for travel.