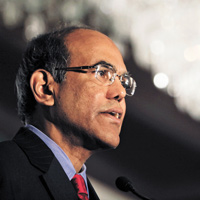 The Reserve Bank of India is one of the few major central banks where monetary policy decisions rest in the hands of the governor, as opposed to a committee. While the RBI is not statutorily independent, in practice it has wide latitude in setting monetary policy.

"India also needs to move towards a monetary policy committee structure," Subbarao said in answer to a question following a speech at the Bank of Mauritius, which has such a committee in place.

The RBI has a technical advisory committee on monetary policy, which was set up in 2009 as a precursor to a formal policy committee. However, the committee has only an advisory role and Subbarao has in several instances made policy decisions that went against the majority view of the panel.