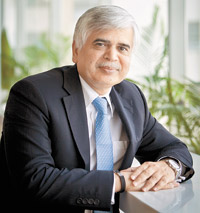 08 November, 2014
Print this article Font size -16+
The price of greatness is responsibility." these words of Winston Churchill were in my mind when I, along with the whole nation, awaited the first budget from the Modi government. With an exceptional mandate awarded by the republic of India, the Modi government’s principal responsibility was to address the hopes and aspirations of an entire nation and spell out an agenda for the future. It is in a unique position to drive reform, insist on fiscal prudence and ensure that Brand India is back with a firm agenda for future growth. While the expectations were high, I also saw a lot of industry leaders remain pragmatic in their approach. No one was expecting miraculous turnarounds.  There was, however, a common desire for a vision and a step in the right direction.

So how did the finance minister (FM) finally fare?  I am not feeling euphoric, but I would say the general direction seems to be right and one hopes that policy reforms will continue beyond the Budget. The objective of attracting investments, both foreign and domestic, is appreciated. There is focus on infrastructure, development and financing, and an effort to stimulate and create a vibrant corporate bond market. Various tax incentives have been provided to the manufacturing and infrastructure sectors including a pass-through status to real estate investment trusts (REIT)/infrastructure investment trusts for the purposes of taxation. These measures are bound to have a buoyant effect on investor sentiments, promoting greater stability and investment in India.

The MSME sector contributes more to our gross domestic product (GDP) than the corporate sector. Entrepreneurship and capital creation can get a boost from focusing on this sector. A committee will examine the financial architecture of the MSME sector, remove bottlenecks and create new rules and structures and give concrete suggestions in three months. To encourage startups, the FM has proposed to set up a corpus of Rs 10,000 crore to provide equity through venture capital funds, quasi equity, soft loans and other risk capital. Let’s hope the FM has sown the seeds of an “Apple” in India.

The long-awaited increase in the foreign direct investment (FDI) limit in defence and insurance has come through. There's hope now that it will be further increased in future again. The FM seems to have successfully avoided the temptation to resort to easy borrowings and has taken effective steps to pull the economy out of populist policies of subsidies.  There is focus on providing impetus to agriculture — with the PM’s irrigation scheme, raising the corpus of Rural Infrastructure Development Fund and the proposal to set up a long-term rural credit fund in National Bank for Agriculture and Rural Development.

There is intent to accept responsibility and avoid unnecessary spending to contain the fiscal deficit at 4.1 per cent for the current financial year. The FM has set himself an ultra-ambitious target of 3.6 per cent and 3.0 per cent, respectively, for the subsequent financial years.  By raising the disinvestment target, the FM hopes to generate funds and concentrate on running the country rather than running businesses. I sincerely hope that having the political mandate and stability will help the government stay close to these targets.

The intent to modernise India is evident, not just through infrastructure and smart cities but through the use of information technology. From digital classrooms to introduction of e-visas to broadband penetration, the Modi government appears to be making an effort to digitise India.

All the above are positive indicators. However, I feel the FM missed an opportunity to make a clear statement to investors by failing to amend the law on retrospective tax changes. This is where a bold gesture was required and the world would have applauded. Another clear miss is the listing out of concrete steps to widen the tax base.

India has an abysmally low gross tax receipts to GDP ratio, currently at 10.2 per cent for the financial year 2013-14; it is less than half that of the UK (26.9 per cent) and South Africa (26.5 per cent).  While the FM in his speech talked about adopting non-intrusive methods and using information technology to broaden the tax base, how this will be achieved remains to be seen. Given the bold speeches of Modi, I was hoping against hope that there would be a date for the goods and services tax. However, we must be content with the promise that all issues will be resolved within this financial year.

In conclusion, what is worth appreciating is a break from a consumption-led budget to an investment-led budget. The budget appears progressive and sets the tone for attaining higher growth trajectory, supplementing job creation and attracting investments for an economy grappling with multiple challenges. It may not be an inspirational budget, but it is a pragmatic one. Many issues, including the direct taxes code, labour laws and land acquisition laws, remain untouched, but I certainly hope the Modi government will deliver what it has promised. This budget is just the beginning.  The buck doesn’t stop at the budget. If I may remind the FM and the PM of the words of Robert Frost — there are “promises to keep and miles to go before I sleep”.