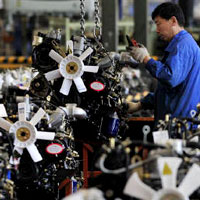 08 November, 2014
Print this article Font size -16+
China's manufacturing sector contracted at its sharpest pace in nine months in August, according to a survey showing falling export orders and rising inventories, a signal that more policy stimulus may be needed to engineer a second half pick-up in growth.

As calls grew louder from analysts and investors for further measures from Beijing to support the economy, China's central bank on 23 August' 2012 completed its largest weekly injection of funds into the financial system in seven months - a move traders saw as a substitute for a cut in banks' required reserve ratio.
The HSBC Flash China manufacturing purchasing managers index (PMI) - a preliminary read-out that provides an early peek at data for August - fell to 47.8 this month, its lowest level since November and well down from July's final figure of 49.3.
"Inventory numbers are the highest on record. Orders to inventory are the lowest since December 2008. Foreign orders to inventory are the lowest since January 2009. It's very hard to put a positive spin on anything within the data," said Robert Rennie, chief currency strategist at Westpac Bank In Sydney.
"Bottom line - a very poor update with some very poor China data to come."
Falling demand from debt-ridden Europe, China's single biggest export market, has put the Chinese economy under pressure, with the ripples now being felt throughout east Asia.
Japan said on Wednesday that exports slumped the most in six months in July as shipments to Europe and China tumbled. Exports from Taiwan, a key part of the global technology supply chain, fell for a fifth straight month in July and South Korea, home to major carmakers, computer chip and flat-screen producers, recorded its sharpest export fall in July in nearly three years.
Sixth consecutive quarters of slowing Chinese growth have also taken a toll on commodities markets, with falling prices and an uncertain outlook prompting miner BHP Billiton to shelve a $20 billion expansion project in Australia.
The Australian dollar wobbled after the latest data from the country's single biggest export market, while Australia's resources minister on Thursday declared that "the resources boom is over."
More Easing Seen
The HSBC PMI has been below the 50 mark that divides expansion from contraction for 10 straight months, and the index is now at levels rarely seen since the 2008-2009 global financial crisis.
But China is loath to unleash a massive stimulus package as it did in 2008. Instead, it has chosen to open more sectors to private capital to help fund new investment projects.
"To achieve the stated policy goal of stabilising growth and the jobs market, Beijing must step up policy easing to lift infrastructure investment in the coming months," Qu Hongbin, chief China economist at HSBC in Hong Kong said in a statement accompanying the index.
China has been "fine tuning" policies to keep growth on track without releasing curbs on the property sector.
Beijing has fast-tracked fiscal spending on key projects, cut the amount of cash banks must keep as reserves (RRR) to free an estimated 1.2 trillion yuan for lending and, in the space of four weeks in June and July, twice lowered benchmark lending rates.
Traders and analysts had widely expected that another RRR cut was imminent, and many analysts still believe a cut is needed to give banks the liquidity they need to boost lending.
"I would cut RRR tomorrow," Ting Lu, economist at Bank of America-Merrill Lynch, told Reuters.
Instead, the People's Bank of China (PBOC) appears to be using an alternative policy tool, injecting a net 278 billion yuan into the interbank money market this week, the largest net injection since early January.
The PBOC's decision to inject the funds through open market operations, rather than through a cut in bank reserves, indicates its concern about stoking inflation.
House prices have now risen for two straight months on a monthly basis, following eight consecutive monthly declines resulting from Beijing's campaign to bring prices down.
Employing open market operations offered the central bank more flexibility and precision, said Ma Yun, an economist at CEBM, a Chinese macro-economic consultancy, because the effect was temporary and could be targeted at specific banks in need of liquidity. By contrast, an RRR cut affects all banks and is effectively permanent unless the central bank moves actively to reverse it, so can have an inflationary affect.
Evidence has been mounting in recent weeks that China's economy is struggling to overcome strong global headwinds, with economists' expectations of a second half pick-up being pushed steadily further back.
Chinese government data last month showed July exports rose just 1 per cent from a year earlier and that new loans were at a 10-month low. Factory output rose at its lowest pace in three years and pricing power faded.
That raised the spectre of a seventh straight quarter of slowing growth in July-September, after the second-quarter expanded 7.6 per cent from a year earlier, only just above Beijing's official 7.5 per cent target.
The prospect of unemployed workers taking to the streets is a top worry for China's ruling Communist Party, particularly ahead of a once-in-a-decade leadership transition this autumn.
However, unemployment levels have not yet come close to those of the winter of 2008-2009. At least 20 million jobs were lost in export-oriented coastal provinces when global trade ground to a halt then. Some estimates put the total as high as 40 million.