More Difficult But Easier As Well 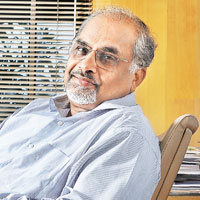 
The proliferation has meant many things. On the one hand, it is much harder now to make impact in a crowded and therefore fragmented market. You could do a great story, but most of the readers of business publications may never get to see it. Grabbing attention becomes difficult too; people are struggling to cope with information overload, they are distracted much of the time, and have shorter attention spans.

On the other hand, there has been a rapid increase in the number of journalist jobs, and rapid pay hikes as demand has exceeded the supply of capable writers. Young people have reached positions of responsibility at fairly early stages in their career. So business magazine offices tend to be young places, and that has been part of the fun, because of the energy and enthusiasm and optimism that young people bring to what they do. The flip side is that too many journalists have no perspective on events and issues, and therefore a lack of context — simply because they haven't been around long enough. Meanwhile, an old problem remains: the scarcest commodities then and now are people with command of grammatical and idiomatic English, and people who understand and have a feel for numbers.

Being a business journalist in the 1980s and 1990s was both easier and more difficult. Easier, because businessmen and CEOs were accessible, not protected by armies of PR people. I remember ringing J.R.D. Tata at home one morning when I was in Mumbai, and being surprised that he picked up the phone himself (I didn't get the interview I wanted). Ratan Tata would phone you directly, without intermediaries, if he wanted to tell you something. And Dhirubhai Ambani gave his direct unlisted number to friendly journalists (I wasn't one of the favoured ones).

But it was also more difficult then, because the supportive information flows of today did not exist. The websites that give you corporate performance history, the key ratios and industry benchmarks, all at the click of a mouse, did not exist. There were few if any equity analysts crunching numbers and giving you their take, and brokerages did not put out reams of reports on every notable company that was listed, and on every industry of any worthwhile size. Data banks were few, expensive and inadequate those days. And of course, there was no Google.

The changes in the market for information have brought about a shift in emphasis, from "scoops" (more appropriately called news breaks these days) to writing that helps improve the reader's understanding of trends and issues. The old emphasis on "contacts" has given way to knowing the industry and its key players. In short, business journalism has matured, though we cannot claim that the standards are comparable with those in the capitals of western journalism; most reporters who can do a 400-word news report still cannot write an analytical piece of 1,000 words. Still, television reporters give you the news instantly, and you do see the odd example of the challenging art of long-form journalism that compares well with anything anywhere.

There are still far too few "negative" stories on companies, and business scandals continue to break mostly in the non-business press — the Tehelkas of the world. One also suspects that a good deal of what gets printed is quite heavily PR-influenced. In a business environment that has become as murky as it has in recent years, telling the complete truth about what goes on in the world of business has become more difficult than ever. Serious investigation needs time, resources and above-average competence, and most business media organisations don't find it either possible or worthwhile to provide these in sufficient measure. All too often, business publications don't even consider this to be a part of their core mission.

Looking back, my time at BusinessWorld (1993-96) was a productive and satisfying period when we ran some really good stories and profiles, introduced prize columnists like P. Chidambaram and Ashok Desai, and saw the over-all development of the magazine and (if memory is not playing tricks) a trebling of circulation in those four years. Two other points are sources of satisfaction today: how well some colleagues of the time have done in their subsequent careers, in India and overseas — leading publications and TV channels, and winning awards — here and internationally; and the warmth and mutual regard that members of the team still have and share.

Unfortunately, there are no photographs of the Sarkar brothers doing a gentle jig, along with everyone else including Shobha Subrahmanyan who was the chief executive, around an evening campfire above a Goa beach, where we had gone for an editorial conference but played water-polo. Those pictures might have undermined the staid image of Aveek, Arup and Shobha, back home in Calcutta (as it was then), and were confiscated!


Ninan is the chairman of Business Standard