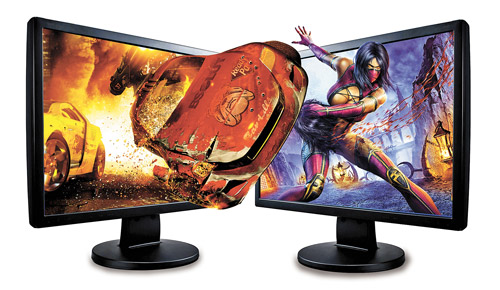 Digital Storm Assassin
"Powerful is an understatement," proudly proclaims the digital storm website. And indeed, the handsome Digital Storm Assassin is more than a powerful gaming machine: the build quality of the system and the manufacturer's dedicated customer service make it a recommended buy for those who can afford $1,627 (Rs 72,978). Featuring 8-GB DDR3 memory and an Intel Core i5 2500K 3.30GHz processor, the Assassin also sports a much-needed 1-TB Western Digital Caviar hard disk drive, while a 1-GB NVIDIA GeForce graphics card makes gaming a visual delight on the black machine. However, the ASUS motherboard with Intel P67 Chipset does not support Scalable Link Interface (SLI), a technology that's meant to increase the processing power available for graphics.

Alienware Aurora
The science-fiction-inspired designs of the alienware brand of pcs from  Dell have always been a big hit, even with those who don't play games. The Alienware Aurora, for example, sports a case that reminds one of an alien's head. Apart from boasting an 8-GB RAM (upgradable to 16-GB!), it also comes equipped with a whopping 2-TB hard drive. The capable Intel Core i5 processor and the 1-GB AMD Radeon high-definition video card give the alien monster all the power it needs to run heavy, graphics-intensive games, be it The Witcher 2 or your old favourite Tomb Raider: Legend.

However, the Aurora's processor boosting limit is clocked at 3.3GHz, which, when compared with some of its rivals, looks insufficient. Some of the Aurora's other standard features include integrated 7.1-channel audio, Alienware High-Performance Liquid Cooling and AlienFX lighting. So, if you are game, get ready to shell out $1,299 (Rs 58,097) to catch this powerful monster of a gaming PC.

Maingear Shift
The sturdy-looking chassis with advanced vertical heat Dissipation of the Maingear Shift is more than a façade. The brushed black aluminium exterior houses a CPU that boasts the power of an Intel Core i5 processor and 8-GB Crucial DDR3 memory. The system also comes equipped with a 64-GB solid-state drive, a 1-TB Samsung hard drive and a decent cooler. However, adding extra hard drives is     a big problem, courtesy the pre-wired layouts in the two additional hard  drive bays.

When it comes to graphics, the Maingear Shift features the staggering 1-GB power of an NVIDIA GeForce GPU. Considering the full specifications, the fact remains that a retail price of $2,040 (Rs 91,239) makes the Shift slightly overpriced as many of its less expensive rivals also deliver similar — and better — performance.

CyberPower Black Pearl
The Cyberpower Black Pearl is an object d'art in its own right. The machine flaunts a beautiful Azza Hurrican 2000 Full Tower Gaming Case that houses an Intel Core i7 processor and a motherboard featuring an Asus Sabertooth X58 chipset complementing the CPU. The staggering capacity of 12-GB onboard memory and a 1-TB SATA hard drive add to the joys of the dedicated gamer. It also boasts a 1-GB AMD Radeon HD video card and Asetek 510LC Liquid Cooling System, while 7.1 HD audio comes standard with the system. But with the base model itself having a starting price of $1,299 (Rs 58,097), it is no wonder that the Black Pearl will make a sizeable hole in your pocket.

Velocity Raptor Signature Edition
It turns out that the raptor signature Edition from Velocity Micro is one of the most expensive gaming PCs in the market. Its scary price of $4,549 (Rs 2,03,454) aside, it is also one of fastest gaming monsters — the Intel Core i7 Extreme Edition processor and the Intel motherboard with X58 chipset are apt to handle multitasking while the SLI-ready NVIDIA GeForce video card renders high-end graphics.

However, given its price and the Signature Edition tag (the system comes with the signature of Velocity Micro's founder and CEO Randy Copeland), the 6-GB memory looks paltry and the loud cooling hardware is something of a downer. Thankfully, it comes equipped with a 2-TB hard drive and a Blu-ray reader. Also, a premium Razer gaming keyboard is supplied with the machine.