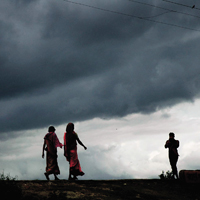 08 November, 2014
Print this article Font size -16+
Monsoon rains may arrive on the southern coast around June 3, the weather office said on Wednesday, 15 May 2013, a late debut that will raise fears any revival for drought-hit tracts of southern and western farmland could be delayed.

The rains, which run from June to September, are vital for the 55 per cent of farmland that is without irrigation in India, one of the world's largest producers and consumers of food.

"The date of onset of southwest monsoon over Kerala is likely to be on 3rd June," the India Meteorological Department said in a statement adding the forecast has an error margin of four days, a time frame treated as normal.

Last year, the monsoon hit Kerala four days after the June 1 date forecast by the weather office, and the season brought below average rainfall across the country, leaving several key sugar- and cotton-growing states parched by drought.