Moily To Fight For Oil PSUs 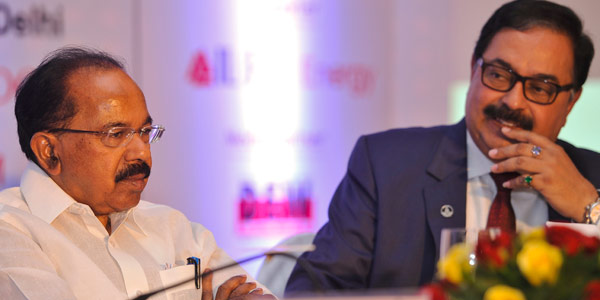 08 November, 2014
Print this article Font size -16+
The petroleum ministry has taken it upon itself to fight for the national oil companies (NOCs) in case the NOCs are called upon to share the possible increase in the government’s subsidy burden. M. Veerappa Moily, Union Minister for Petroleum and Natural Gas (MoPNG), declared his support for the NOCs in a seminar hosted by Assocham on Wednesday, 17 July. “I will fight out the subsidy,” said Moily in his endeavour to assure the chairman of ONGC, Sudhir Vasudeva when the CMD complained about the injustice of the subsidy system.

During the seminar held in New Delhi, Vasudeva shared concerns regarding the possibility of an increase in subsidy burden in lieu of the government’s decision to help the power and fetiliser sectors with lower input costs of gas. “This would be very detrimental to us. In case our subsidy share is increased we will not be left with any resources to do further explorations,” said Vasudeva.

He also stressed that if the government is serious about reducing its import bill it has to take care of NOCs. “A lesser susbsidy burden and a remunerative price will help us in putting in more investments in the sector,” said Vasudeva. Saying that more than 70 per cent of the MOPNG’s target for 100 per cent energy independence will come from the exploration of the domestic sources, he stressed for the need to keep the surbsidy burden light.

The cracks in the recent policy decision to hike the price of all domestically produced gas are coming out. After the Cabinet Commission on Economic Affairs increased the price of gas with effect from April 2014, power sector had raised concerns on the higher price impacting the feasibility of the gas-based power projects.

Giving into these concerns, the finance minister and the petroleum minister assured that steps will be taken to help the two regulated sectors — fertiliser and power — with the input costs. Some government sections are talking about the possibility of asking the NOCs to share the increase in the subsidy burden which will come as a consequence of lowering the gas price for the two sectors. This has raised the hackles of the NOCs which already share a huge percentage of the total Rs 1.60,000-crore subsidy given out to the petroleum sector.