Moily Denies Favours Given To Cos For Funding His Trust 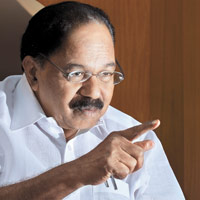 08 November, 2014
Print this article Font size -16+
In the eye of a storm over his family-owned Trust allegedly receiving grants from corporates, Oil Minister M Veerappa Moily said on Wednesday, 20 March 2013, he had at no point extended any help or favour to any company for seeking aid. The names of corporate giants Reliance and ITC have cropped up with regard to funding the Trust.

Moily, in a statement, said the Kisan Sabha Trust, operated by his family members, approaches corporates who are promoting the social cause for the benefit of the people from the bottom of the pyramid.

"I would like to categorically state that there have been absolutely no occasion for me to extend any kind of favour or help to any corporate for seeking financial assistance for the Trust," he said.

He also accused the petroleum minister of illegally allotting Gomal land to the trust when he was the chief minister during 1995-96.

Moily said his son Harsha professionally and independently runs the company, MokshaYug Access India Pvt Ltd (MYA) and is a trustee in the Kisan Sabha Trust.

He said he was immensely "pained to see his son Harsha, who built and professionally manages a company that is playing an important role in driving prosperity in rural India, is being condemned by vested interests merely because he happens to be son of a political person".

"It is also a matter of fact that Harsha has been successfully working towards social cause on the basis of his own conscience and without any political ambitions," he said.

"MYA is a professionally run company engaged in the activities beneficial to the people belonging to bottom of the pyramid of economic development," the minister said.

On 19 March, Harsha had stated that MYA "received funding from professional investors in 2008, much before my father joined the government."

"MYA's investors did due diligence on MYA through the most part of 2007, and the funding from VCs (venture capitalists) came through in March 2008," he said.

On ITC funding the family trust, Kissan Sabha Trust, Harsha had said the Trust has not received any funding of Rs 6 crore as was being reported.

"As a practice, budget requirements are drawn to understand the funding requirements to run educational institutions for underprivileged poor and school dropouts. The estimation for a yearly operating expenditure was worked out at Rs 50 lakhs a year.

"A corpus to ensure yearly interest receipt was worked out at Rs 6 crore to yield Rs 50 lakhs at 8 per cent interest per annum. The estimation of creating a corpus is an accounting exercise," he said, adding "the Trust has not received any funding of Rs 6 crore."

Moily senior was made the Law Minister when UPA-II came to power in 2009 and moved to the Corporate Affairs Ministry in 2011.

On association of Reliance Industries executive Ananth Ravi with MYA, the Minister said Harsha's association with Ravi dates back to 1999.

"Moreover, the mentorship role that Ananth Ravi played was between December 2010 to July 2011 when he was not employed with Reliance and Ravi excluded himself from the Advisory Board upon re-joining Reliance in August 2011," he said.

Kisan Sabha Trust, the Minister said, was founded in 1968.

Founded in 1992, the Mahatma Gandhi Residential High School (MGRHS) being run under the aegis of the Kisan Sabha Trust has been engaged in providing education for children from the weaker sections of the society and the school drop outs.