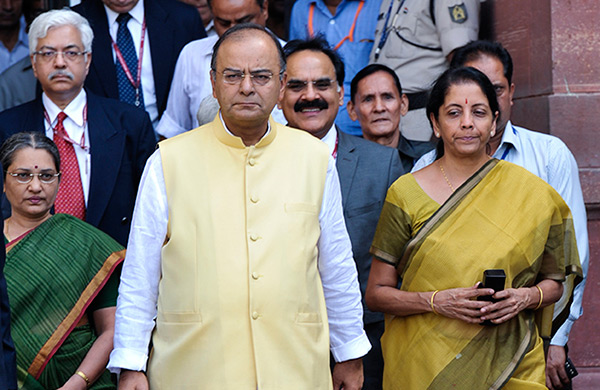 08 November, 2014
Print this article Font size -16+
Describing the general Budget as a 'sanjeevani' (new life) to the "moribund economy", Prime Minister Narendra Modi said on Thursday (10 July) it converts hopes and aspirations of the people into trust and is in line with his government's endeavour to bring India out of crisis. "This Budget is a new ray of hope for the poor and downtrodden sections of society," he said commenting on the maiden budget of his government presented in Parliament today.

Modi's optimism was echoed by corporate India which welcomed the budget, saying it sets the tone for attaining higher growth trajectory, job creation and attracting much-needed investments for an economy grappling with multiple challenges.

"I am very happy personally by his (Finance Minister Arun Jaitley's) focus on job creation. I think that is something which is crucial for a country like India. clearly," he added.

However, the rating agencies watching India with hawk eyes were not so impressed.

The maiden Budget of the Modi government unveiled structural reforms aimed at reviving growth, winning praise from investors despite a lack of clarity over how he would cap the big fiscal deficit. Ratings agency Moody's said a lack of detail on how India would cut the fiscal gap made it "challenging to assess the credit impact" of Jaitley's budget, but still said it would keep its investment grade rating for India.

Andrew Colquhoun, Head of Asia-Pacific Sovereigns Group, Fitch Ratings, on the other hand said: "The overarching point of the Indian government's budget announcement is that the rhetoric and targets are credit constructive in many areas, including returning to 7-8 per cent economic growth and achieving budget deficit reduction. However, implementation will be key. Fitch is surprised that  the Indian Finance Minister Arun Jaitley has stuck with the outgoing government's fiscal consolidation path. The agency is currently unsure how this can be met without further revenue-strengthening or expenditure-saving measures. The revenue measures that were announced today actually have the net effect of reducing revenues by  0.1 per cent to 0.2 per cent of GDP. Fitch has a more cautious projection on divestment proceeds than the budget. It remains to be seen how the government would react to a shortfall in tax or divestment revenues, if it occurred."

India Inc Welcomes Budget
"One of our key priorities was to see a clear course of action to end tax adventurism. The government has tried to address this by promising to not to change any of the tax provisions retrospectively which creates a fresh liability and committing to provide a stable and predictable taxation regime that will be investor friendly and spur growth," said Ficci President Sidharth Birla.

Terming the budget as "pragmatic and extensive", CII Director General Chandrajit Banerjee said that it "lays out a medium-term vision for the economy and meets industry expectations on growth and employment creation".

nvestors have piled into Indian stocks on hopes that Modi's leadership and mandate would break a logjam thwarting a host of reforms during the 10-year tenure of his predecessor Manmohan Singh, whose coalition government became increasingly divided. While the concrete measures announced by Jaitley fell short of the most bullish expectations, Indian stocks and bonds finished a volatile day 72 points down after climbing 434 points at one point.
Echoing similar sentiments, PHD Chamber President Sharad Jaipuria said: "The Budget is encouraging on building consumers', investors' and general confidence and aims at enhancing growth, creating additional employment opportunities and containing inflation with the desired focus on garnering much needed investments, both public and private".

HDFC Chairman Deepak Parekh said: "Infrastructure funding had become a bad word for banks. Banks were not willing to fund. With this move, an out of the box thinking will enable long term lending for infrastructure sector".

K V Kamath, Non Executive Director at ICICI Bank said: "The budget shows that the government is willing to listen and then state that they will act in due course".

"These measures are very progressive and good for the bond and equity markets," said Murthy Nagarajan, head of fixed income at Quantum AMC in Mumbai. "It would lead to a reduction of inflation in the coming years due to a lower fiscal deficit."

Expectations had been high that the government would utilise India's strongest election mandate in 30 years to take radical steps comparable to the 1991 market reforms that unleashed an era of high economic growth.But in a bid to halt a two-year spell of weak growth, the government instead announced incremental steps to boost capital spending in Asia's third largest economy and reassure foreign investors that they would get fair treatment.

Jaitley announced an 8 per cent rise in spending, roughly unchanged after taking inflation into account. The government will also seek to raise a record $13 billion from selling state assets - nearly four times what the previous government raised in the fiscal year ended in March 2014.

IT Rates Unchaged
The Budget for 2014-15 left income tax rates unchanged but provided sops to small and marginal assessees by raising the threshold exemption limit from Rs 2 lakh to Rs 2.5 lakh and investments under 80C by Rs 50,000 to Rs 1.5 lakh while promising not to bring tax changes with retrospective effect.

Presenting the maiden budget of the BJP-led NDA government, Finance Minister Arun Jaitley raised the deduction limit on interest on housing loan for self-occupied property from Rs 1.5 lakh to Rs 2 lakh and free-baggage allowance for inbound passengers from Rs 35,000 to Rs 45,000.

The Budget makes cigarettes, tobacco, pan-masala, gutka and cold-drinks costlier by raising excise duties while CRT TVs used by poor, LCD and LED TV panels of less than 19-inches will be cheaper through cuts in customs duties.

In encouraging signals to domestic and foreign investors, Jaitley announced that all fresh cases arising out of retrospective amendments of 2012 in respect of indirect transfers will be scrutinised by a high level committee to be constituted by the CBDT before any action is initiated.

"I hope the investor community both within India and abroad will repose confidence on our stated position and participate in the Indian growth story with renewed vigour," he said, offering a stable and predictable tax regime.

He also said the government will revive the revised Direct Taxes Code (DTC) taking into account the comments of stakeholders.

FDI Cap In Defence, Insurance Raised To 49%
The Finance Minister said government will promote FDI by raising the cap to 49 per cent in Defence and Insurance with full Indian management and control.

While presenting the Budget 2014-15, Finance Minister Arun Jaitley said that India is the largest buyer of defence equipment in the world and the domestic manufacturing capacities are still at a nascent stage.

"The composite cap of foreign exchange is being raised to 49 per cent with full Indian management and control through the FIPB route," he said.

The Budget raises defence spending by 12.5 per cent to Rs 2.29 lakh crore. Non-plan expenditure for the current year has been estimated at Rs 12,19,892 crore with additional amount for fertiliser subsidy and capital expenditure for armed forces.

Non-tax revenues for current financial year will be Rs 2,12,505 crore and capital receipts other than borrowings will be Rs 73,952 crore.

Slow Growth In Manufacturing
In an apparent reference to the previous government, Jaitley said slow decision making had resulted in a loss of opportunity and two years of sub-5 per cent growth in the economy has resulted in challenging situation.

He said government intends to usher in a policy regime that would bring the desired growth, lower inflation, sustained level of external sector balance and prudent policy stance.

The Finance Minister said the present situation presents a challenge of slow growth in manufacturing sector, in infrastructure and also the need to introduce fiscal prudence.

The tax to GDP ratio must be improved and non-tax revenue increased, he said while pruning the negative list for levy of service tax. .

The concessional tax rate of 15 per cent on dividends received by Indian companies from foreign subsidiaries is being continued because it has resulted in enhanced repatriation of funds. There is no sunset date to ensure stability of policy.

To enhance the functioning of income tax department as facilitators, 60 more Ayaykar Seva Kendras will be opened to promote excellence in service delivery.

Taking note of the fact that power supply continues to a major area of concern in the country, the Budget proposes to extend the 10-year tax holiday to undertakings which begin generation, transmission and distribution by March 31, 2017, instead of annual extensions.

As part of financial inclusion mission, a special small savings instrument to cater to the requirement of education and marriage of the girl child will be  introduced.

A National Savings Certificate with insurance cover will also be launched to provide additional benefits for small savers. In the PPF scheme, annual ceiling will be enhanced to Rs 1.5 lakh per annum from Rs 1 lakh at present.

In defence allocation, Rs 1000 crore has been set apart for implementing one-rank-one-pension policy. Capital outlay for defence has been raised by Rs 5,000 crore over the amount provided in the interim budget.

The Finance Minister also announced setting up a war memorial, war museum and a national police memorial. For modernisation of state police forces, Rs 3,000 crore has been allocated.

An integrated Ganga conservation mission, called 'Namami Gange' is proposed to be set up with an outlay of Rs 2,037 crore for this year.

An NRI fund for Ganga will be set up which will finance special projects. Rs 100 crore have been set aside for ghat development and beautification of river front at Kedarnath, Varnasi, Haridwar, Kanpur, Allahabad, Patna and Delhi.

A 1,620-km Ganga inland waterway development from Haridwar to Haldia is planned to be completed in 6 years at a cost of Rs 4,200 crore, Jaitley said.