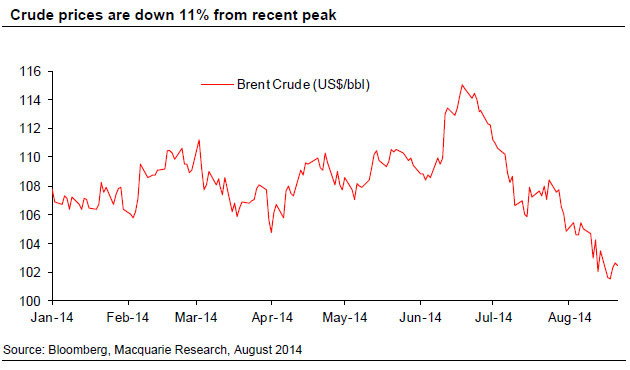 08 November, 2014
Print this article Font size -16+
He came in with fire and bluster. In a two-month long election campaign, Narendra Modi literally tore apart the achievements of the UPA-II government led by Prime Minister Manmohan Singh. Now as Modi completes 100 days as India’s 15th Prime Minister, how have the first 100 days been?

Macquarie Research analysed the performance of the Modi government. Its Modi Meter gives the government a phenomenal rating of 8.5/10 based on four yardsticks — economics, foreign policy, governance and parliament productivity/state relations. Macquarie will be doing a quarterly review of the government.

It has given the government a 10/10 rating for foreign policy despite calling off the Indo-Pak foreign secretary level talks. On all the other parameters, the government has been rated at 8/10. It points out that when the government started out, there were many factors going against it. That included a potential 43 per cent deficit in the rainfall during the monsoon, high global oil prices ($ 115 a barrel) and the Ukraine-Russia standoff. But, as the rains picked up in August, the monsoon deficit came down to 18 per cent. Crude prices too have softened to a shade over $100 a barrel.

In economic measures, the big developments include introducing 100 per cent FDI in the railways; raising FDI in defence to 49 per cent and relaxing FDI norms in real estate. The flagging off of the high speed railways and the Make in India pitch during the Independence Day speech to the nation have also added to the economic lustre.

In governance, the smaller cabinet was a step in the right direction. The scrapping of Group of Ministers and empowered Group of Ministers to facilitate faster decision making. In foreign policy, the Modi government is looking to build bridges with neighbours. The other plus points included the tough stance at the WTO summit against the Trade Facilitation Agreement to protect Indian farmers and the lead taken to create a BRICS Bank.

However, a great positive factor with the NDA government has been a productive Parliament. It managed to pass 13 of the 20 bills introduced. In 167 hours in the Lok Sabha, only 14 hours were lost to disruptions; in the Rajya Sabha there were 142 hours of work and 34 hours of disruptions.

The flagging off the Mumbai-Ahmedabad bullet train and forming a high speed rail corridor called the Diamond Quadrilateral too has evinced investor interest. It also went ahead and hiked railway tariffs, that would go some way to improve finances for the Indian Railways.

While these positives are there, some negatives are also there. This includes the failure of the government to push through the bill raising FDI in insurance to 49 per cent; no clear roadmap for the introduction of the Goods and Services Tax (GST) and the Direct Taxes Code (DTC); postponing a decision on the hike in natural gas prices and the Food Security Plan by three months each.

The first 100 days have not been as action packed as what PV Narasimha Rao had when he took over the reins in 1991. It’s still early days for Modi. He still has another 1,726 days as PM.