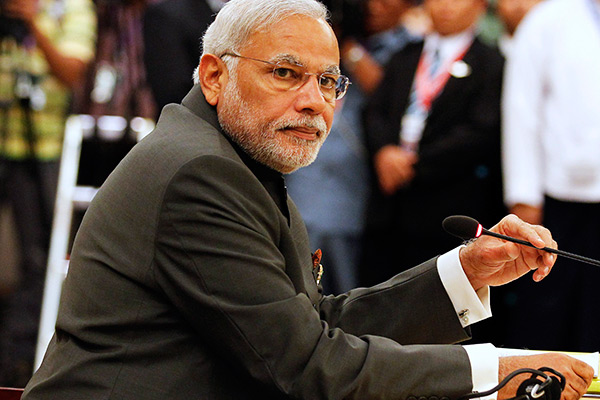 12 May, 2015
Print this article Font size -16+
The much anticipated visit of Prime Minister Narendra Modi to China could not have come at a more opportune time. The euphoria seems to have kicked in, as in his typical flamboyant style, Modi has set the ball rolling, by opening an account on popular Chinese social micro blogging site Weibo. This step has achieved accolades and many are viewing this step as one firm step towards integrating a rather sketchy relationship between the neighbours. In fact, the Prime Minister has picked up 46,000 followers in six days, an indication of the approval that this move is getting in China.
However, the political and economic gains that are in store for both the countries will also determine the success of his visit. The clearance of the Smart City project by the Cabinet, has given a much required thrust to the stagnant steel market of China, and this is where Modi can prove to be a silver lining. India requires steel for the urbanization drive it is expected to enter under the present government, and the coming  years promises a boost in infrastructure, roads and buildings.
Read Also: Rail Projects Outweigh Rivalry Before Modi Visit

The steel industry in China can now look towards India as a potential market, and can hope that the exponential demands that is expected to arise helps in pulling out the stagnant industry out of doldrums. India is forecast to grow, and urbanisation will take place much the same way it did in China, and the expertise could be tapped into,  for our benefit.
Trade deficits are expected to be the primary fulcrum around which this trip will rotate. Steel exports by China, and which in turn will enable India to open itself more to Chinese markets, will certainly help is reducing the trade deficits. Also, abolition of the non-tariff  barriers will go a long way in reducing the trade deficits, The ever loss incurring Indian Railways, will also look for investments from China, as this was emphasised during Chinese Premier Xi Jinping’s visit to India earlier this year.
The two torchbearers of South Asia are once again engaging in talks, that have the potential to revamp the growth of both the countries. India has much to gain from this visit, and the tactical nuances of Prime Minister Modi will be put to test again, considering China has developed a sudden bonhomie with Pakistan lately.
Tags assigned to this article:
politics narendra modi othertop1 modi china visit manish kumar pathak