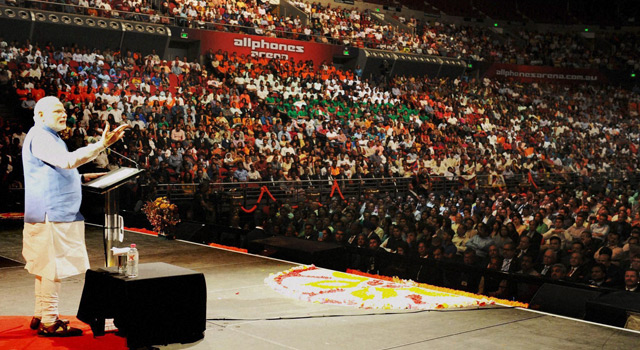 "I know that behind this affection lie expectations," Modi told the excited crowd. "We want to create the India you are dreaming of."

Modi's appearance at the 21,000-seat arena, which hosted the Rolling Stones last week, underscored the rock star status he enjoys among some Indians at home and abroad.

He promised lifetime visas to people of Indian origin, repeating an offer he made to expatriates in the United States that would seek to strengthen cultural and business ties between overseas Indians and their home country.

"He has a magnetic personality and he makes a lot of sense," said Mustafa Jamnagarwala, who migrated to Sydney 1-1/2 years ago from India. "Now I know if I invest back home my money is safer."

Modi arrived on Friday for the G20 economic summit in Australia, where about 300,000 Indians live. Trade between the two countries stands at around $15 billion a year, or just a tenth of that between Australia and China.

Modi urged overseas Indians to boost investment at home, reprising an appeal made elsewhere, including the United States, where he sold out New York's Madison Square Garden in September.

He took office in May vowing to create jobs and ignite the Indian economy after years of sluggish growth, launching signature initiatives such as 'Make in India' and 'Clean India'.

Australia is emerging as a key source of thermal coal for India's growing number of electricity users.

Indian trade and infrastructure conglomerate Adani Enterprises has signed a pact for a loan of up to $1 billion from the State Bank of India for a $6 billion Australian coal mine, rail and port project.

But Modi still has some way to go in winning over potential investors.

"He is expecting people to contribute," said Santosh Kashid, who migrated to Sydney 10 years ago. "However, unless you make India a place to live and work it won't be possible to attract people back home."

While Prime Minister Narendra Modi was busy wooing Australian investors to India on Monday (17 November), the G20 has already cited India among countries for launch of major investment initiatives and for having a sustainable growth.

Major Investment Initiative For India
A Brisbane Action plan released as part of the G20 communique also said that the state of the global economy calls for a comprehensive and coherent policy response that restores near-term demand, removes medium-term supply constraints and builds consumer and business confidence.

"While growth in some key emerging market economies is robust and is becoming more sustainable, including in China and India, it is slowing in some other countries," it said, adding that many low-income countries are performing well."

Railways Minister Suresh Prabhu, who was Prime Minister Narendra Modi's Sherpa at the summit of the group of 20 industrialised and emerging market economies, told reporters that India's expected growth is projected to be over six per cent in 2014-15.

Transparent Policies
Speaking at a breakfast meeting hosted by Queensland Prime Minister Campbell Newman on Monday where several Australian business leaders were present, Modi said the environment that is prevailing in the country is "welcoming" and easy to do business, besides having transparent and predictable policies.

"You will begin to find a difference in India," Modi said, asserting that his government is focused on eliminating unnecessary laws and regulations, and making processes easier.

Modi also said that Queensland can be an important partner in India's development in energy, mineral resources, agriculture and food security, education and advanced technology in some areas.

"We have made our policies transparent and predictable. We have made our procedures clearly defined and smooth," Modi said during a breakfast meeting with Australian business leaders this morning before leaving for Sydney.

He said good governance is the starting point of change and it is important to business as it is to ordinary citizens.

"You will not only be able to convert opportunities into partnerships, you will do it in an environment that is welcoming and easy to do business in," he said.

Modi also said that his government has launched 'Make in India' as a new mission to promote manufacturing in India.

He also told them about his plans to build 100 Smart cities, 50 metro projects and about the modern waste management system for another 500 cities in India.

He mentioned about the projects like The affordable healthcare within everyone's reach, sanitation for all by 2019, a roof over every head by 2022 and electricity in every household.

Modi also praised Queensland for sending a number of trade missions to India.