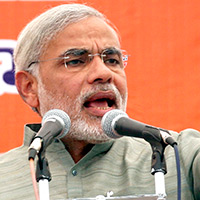 Congress on its part, accused Modi of deliberately misinterpreting facts and called him "spinmaster".  Congress spokesman and Union Minister Kapil Sibal said that Priyanka never made any such insinuation and that she was only referring to BJP's "low-level" politics.
"He knows that he is misinterpreting. He does it purposefully. That is Narendra Modi. He will give it a spin that has nothing to do with fact", he told reporters in Delhi.
After tweeting his umbrage at Priyanka's mention of nich (low-level) rajniti, Modi in his speeches in Domariyaganj in UP also pushed home his point in a rabble rousing speech. Modi asked whether it was a crime to be born in backward caste.
"You can insult Modi as much as you like, you can hang him. But do not insult the lower caste...I was attacked and dubbed as a tea seller as if it I had committed a crime.
Questions were raised as to how he (Modi) can run the country ...I have sold tea not the country," the BJP Prime Ministerial candidate said in a sharp riposte to Priyanka's remark.
"Did I insult anyone despite being born in backward caste? Such a dirty blame has been put on me," he said.  "As I belong to a socially backward caste, they consider my politics to be of a low level (neech rajneeti)," Modi has said earlier in a series of tweets.
"Some people (Gandhis) cannot see that it is due to renunciation, sacrifice and hard work of people of backward class that the country has reached to the present position," Modi further tweeted targeting Priyanka.
"This 'neech rajneeti' will wipe tears of thousands of people and free India of 60 years of mis-governance and vote bank politics," he said.
Read Also: Modi Storms Congress Castle

"The height of 'neech rajneeti' has power to make Mother India a prosperous and powerful nation," Modi said.
The BJP strongman had yesterday taken on the Gandhis at their home turf Amethi, the constituency of Congress vice president Rahul Gandhi, in the last lap of electioneering.
He had termed Priyanka Gandhi as "arrogant" for asking who Smriti Irani (actress-turned politician and BJP candidate from Amethi) was.
In a counter to the barbs that he practices 'politics of anger', Modi had accused her father and former prime minister Rajiv Gandhi, her mother Sonia and brother Rahul for practicing the same.
Within hours, Priyanka hit out at Modi saying he had insulted his martyred father on Amethi's soil and accused the Gujarat chief minister of practicing 'neech rajneeti'.
"He has insulted my martyred father on Amethi's soil. The people of Amethi will never forgive him for this. My booth level workers will give reply to this low level politics.
There will be a reply from each and every booth of Amethi," Priyanka had said.
In an election rally in support of Smriti Irani yesterday, Modi accused Congress of practicing politics of "arrogance" and said Rajiv Gandhi, when he was Congress General Secretary, had once publicly "abused" and "humiliated" the then Andhra Pradesh Chief Minister T Anjaiah at airport.
Anjaiah was the chief minister between 1980 and 1982.
War Of Words Continue
Congress spokesperson Rashid Alvi alleged that Modi was indulging in "caste politics" in his desperate attempt to garner votes.
"It is unfortunate that he distorted Priyanka Gandhi's comments for political mileage. In BJP, whether one belongs to upper caste or lower caste, all of them are doing low-level politics," Alvi said.
The BJP spokesperson Nirmal Sitharaman said Priyanka was "ill-advised" in using the 'neech' expression which was "insulting".
"She (Priyanka) doesn't understand the impact it can have, the negative impact it can have especially at the time when this country is trying to extricate itself out of caste politics.
Senior BJP leader Arun Jaitley said the use of the word 'neech' should have been avoided since it has been mentioned in the social context of India.
Priyanka had yesterday hit out at Modi saying he has insulted her "martyred" father Rajiv Gandhi during his speech in Amethi and accused him of indulging in "low-level" politics.
(Agencies)
Tags assigned to this article:
politics news 6 narendra modi priyanka gandhi 2014 elections election 2014