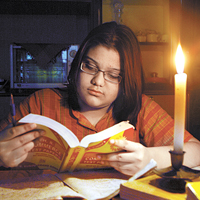 The night of 30 July will be remembered all over North India for another 10 years; it saw the worst blackout since 2001. Delhi’s flaunted metro trains stopped running; the only way commuters could reach office was by hanging on to buses or walking. With temperature at 29 degrees and humidity at 84 per cent, they had to be ready to shed buckets of sweat; and since the New Delhi Municipal Corporation, in its determination to make the city an international model, has thrown out all vendors of cold water and all sugar cane juice millers, the sweat could be replenished only with expensive bottles of water. Shops ran out of water before long; cola makers will remember 30 July as a day of record sales. Buses ploughed through crossings, for traffic lights were not working. When they are off, everyone is on his own. Delhiwallahs know the art of making a perfect traffic jam; only they have the talent for navigating out of one in less than an hour. However, the Prime Minister probably slept well, for power for his house comes straight from the Himalayas.

That is just part of the story of Delhi; there are parallel stories of Kanpur, Lucknow, Patna, Agra, Patiala, Amritsar, Farrukhabad, Madhupur, Sawai Madhopur, Manikpur, and many other places that never get into the news.

Such chaos may be expected when no one is in charge, but that is not India. It has a power minister; as if the people did not know, he announced that there was a power failure in seven states of northern India, the cause was unknown, and it was not known when power would be restored. That would have given the people considerable relief if only they had been able to hear their ice-cool, ever-smiling power minister; his sang froid would have set them a good example. The only problem was that their television sets did not work, so they could not see how well he was coping.

The less polite ones among them would want to ask why we need a power minister if we are to have such disastrous power failures. But there is not just a power minister; there is a ministry under him. It has little to do, for the Centre produces little power and serves no customers. To serve them, there are power ministers with ministries in every state. They too have nothing to do with supplying power; under them are state electricity boards. Power was supplied more reliably when they did not exist; a company or two took care of the power requirements of every city. That was long ago; since then, technology has changed, and so has the level of ambition. Today, it is perfectly feasible to supply power to everyone in the country, though it may require a bit of cross-subsidisation. But it does not require the electricity boards and the hordes of very important persons whom they give an excuse for being in government. All it needs is a transmission and distribution corporation, any number of competing power producers, and a regulator to ensure that the transmitter and distributor is fair to generators and customers. If the present superstructure were replaced by this basic infrastructure, that would be a reform for which the people would gratefully remember the rulers.

Our Prime Minister set himself the task of breaking the restraints that big powers had placed on India’s emergence as a nuclear power. He did it; it is his outstanding achievement in a long tenure of eight years. The point of doing it was not to make more bombs; it was to produce power. And there, the country is worse off than when the Prime Minister came to power. Undoubtedly, the imbroglio in power is complicated; it involves so many politicians and bureaucrats. But it is precisely the kind of problem that a Prime Minister is expected to resolve. If he had tried his charm as assiduously on chief ministers as he did on George W. Bush, he would have found some solution to the contretemps. He might not have convinced all the chief ministers. But even if he had managed to take the chief ministers of northern India with him, the common man would not have had to suffer the power breakdown of 30 July.

But all is not lost. There is still the general election of 2014, which is no doubt giving the Prime Minister sleepless nights despite the air conditioners running on Himalayan power. If he could declare, a month before the elections, that he has found the solution and that there will be no more power breakdowns, he would improve the chances of his party by a few hundred per cent. The people are proud to see their Prime Minister hobnobbing with the leaders of G20. But they are not proud to experience the world’s worst power cuts.