Mira Furlan passes away at 65

Mira Furlan passes away at 65

Washington [US], January 23 (ANI): Actor Mira Furlan, best known for her roles in the television series 'Lost' and 'Babylon 5,' has passed away. She was 65 when she breathed her last.
According to Fox News, Furlan's Twitter handle confirmed the sad news of her demise on Thursday with a photo that included her death date as January 20. It also shared a past quote from Furlan. 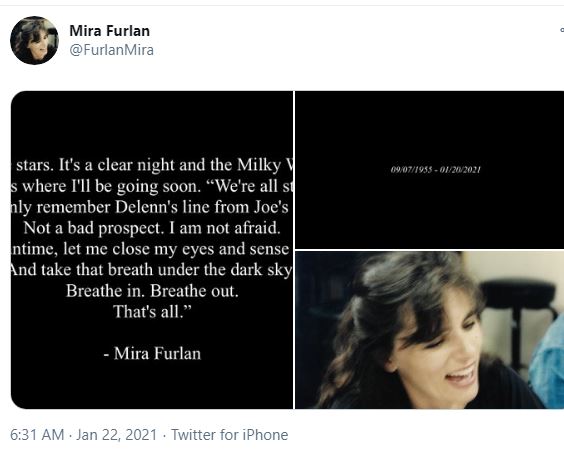 "I look at the stars. It's a clear night and the Milky Way seems so near. That's where I'll be going soon. 'We're all star stuff', I suddenly remember Delenn's line from Joe's script. Not a bad prospect. I am not afraid," the quote read.
"In the meantime, let me close my eyes and sense the beauty around me. And take that breath under the dark sky full of stars. Breathe in. Breathe out. That's all," the quote further read.
As reported by Fox News, a representative for Furlan also shared a statement regarding the actor's demise on Friday.
"Mira was a long-time client who was one of the most compassionate and giving person I know. Not only was she so talented but was down-to-earth and real which isn't always the norm in our business. The Imperium 7 Talent Agency family will miss her dearly and our thoughts and prayers are with her family," representative Steven Neibert said.
The cause of the death has not been revealed yet. However, 'Babylon 5' creator J. Michael Straczynski shared a tribute to the actor on Wednesday where he suggested her health had recently declined.
"It is a night of great sadness, for our friend and comrade had gone down the road where we cannot reach her. But as with all things, we will catch up with her in time, and I believe she will have many stories to tell us, and many new roles to share with the universe," Straczynski tweeted.
The screenwriter shared a lengthy statement about Furlan, beginning with her audition for the action-drama series which is set in the mid-23rd century on a space station called Babylon 5 that covers political and racial tensions.
Furlan held several stage roles and was a part of the Croatian National Theatre, Variety reported. She emigrated to the United States in 1991. The late star also played the role of Danielle Rousseau on ABC's hit show 'Lost.' (ANI)