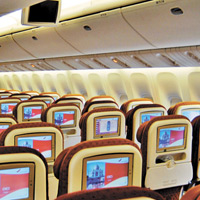 08 November, 2014
Print this article Font size -16+
The Indian Civil Aviation Ministry Friday asked all airlines to limit the number of 'privileged' seats for which they could charge a fee, with a few carriers imposing price tags on a very large number of them.

At a meeting with top officials of all airlines here, the Ministry also asked them to identify the rows of seats to be charged, Civil Aviation Secretary K.N. Shrivastava said.

However, no upper limit was set on the number of privileged seats or was any time limit fixed for the airlines to take a decision on the issue. Shrivastava said after the hour-long meet that the airlines would report back within a week or ten days.

The Ministry also extended the deadline of reducing the number of foreign pilots to zero by three years till 2016 while asking the carriers to reduce the number of expatriates in their ranks and recruit more Indians holding the Commercial Pilot Licence (CPL), even as trainees, he said.

Following the recent exercise of unbundling various services like charging for privileged seats, meals and excess baggage, several airlines, including IndiGo and Jet Airways, put a price on seat selection both in domestic and international flights. IndiGo was charging even for a middle seat, reports said.

Air India and Jet, among others, slashed the free baggage allowance in domestic flights from 20 kgs to 15 kgs and decided to charge for baggage in excess. Air India has not yet decided on charging for seat selection.

When pointed out that there was no decline in base fares despite the airlines being allowed to charge for these services, Shrivastava said the airlines were told to "reduce the gap between the highest and the lowest price buckets", especially during peak season, to increase passenger loads.

Even during the peak season, about one-quarter of the seats of an aircraft went vacant, he said.

The Civil Aviation Secretary said that the airlines were also receptive to the government's idea of creating an aviation ombudsman to resolve disputes in the civil aviation sector.

But the airline representatives wanted the Ministry to come out with details of the scope and functioning of such an ombudsman and said that their opinion should also be sought in that regard.

In light of the government's thrust towards promoting regional connectivity, the issue of Indian carriers acquiring smaller aircraft to operate to remote airfields and airports also came up at the meeting.

While some airlines have started acquiring smaller planes, representatives of some other airlines like IndiGo said that buying aircraft was a commercial decision and would depend on the business models followed by each individual airline.

However, the airlines have not cut their base fares and claim fares should fall in due course after they get a clearer picture of the revenue potential from unbundling of services.

Civil aviation ministry officials said that the airlines were told to be more transparent about the new charges.

The Air Passengers' Association of India, which has opposed unbundling of services, has demanded more transparency in the manner these levies were being imposed.

"I fear that airlines will start charging extra for families or groups who want to get seats together and face the prospect of being allotted separate seats. All this is nothing but attempts to raise fares indirectly," said D Sudhakara Reddy, the association President, has said in a statement. PTI ARC