Men Not At Work 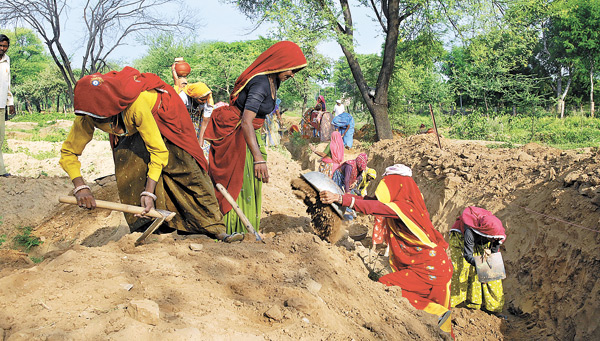 08 November, 2014
Print this article Font size -16+
Even as the Congress-led united Progressive Alliance (UPA) readies to seek ano­ther five-year term next year, the waning popularity of one of its most popular schemes — the Mahatma Gandhi National Rural Employment Guarantee Scheme (MGNREGS) — in key states has befuddled authorities and economists alike.

Introduced in 2006, the scheme was extended to all rural districts a year before the 2009 polls and is believed to have propelled UPA’s second successive win. The flagship initiative entitles every poor rural household to 100 days of manual, unskilled work and wages. But five years after it introduced MGNREGS nationwide, the government is trying to figure out why the number of beneficiaries who were provided 100 days of employment under the scheme fell 30 per cent between 2008-09 and 2011-12.

The drop in numbers can have implications for UPA II, which has drawn flak for policy inertia, sca­ms, price rise and slowdown.

It’s a peculiar situation, feel social sector experts; 2010-12 was not a high economic growth ­pha­se, when ample job opportunities for unskilled labour could reduce the attractiveness of guaranteed minimum wages. The rural ­development ministry, which administers the programme, is carrying out an internal assessment to understand the trend.

Incidentally, the average number of workdays created for each household under MGNREGS, which has never touched the 100-day promise, declined from 47.95 (average person days per household) in 2008-09 to 42.43 in 2011-12. So far this year, the average has been 34.65. The demand for jobs has also fallen in many states, even though increasing demand in others minimised the overall decline. Across the country, 50.4 million house­holds had demanded jobs (of which 49.9 million got them) during 2011-12 as against 45.5 million demands (45.1 million actual jobs) that were made during 2008-09.

Overall, the states where demand and job creation have fallen are big enough to create headache for the UPA. For instance, Bihar — which saw an average of over 4 million economically weak rural households demanding work under MGNREGS between 2008-09 and 2010-11 — saw the demand drop to 1.7 million house­holds last year. This year could be better, as 1.6 million households have already demanded jobs, but it is unlikely to touch the 4-million mark. In the case of Rajasthan, 2008-11 saw, on average, over 6 million households demanding work under the scheme. The number fell to 4.7 million last year.

While the government budgeted Rs 40,000 crore towards MGNREGS in 2011-12, the allocation for 2012-2013 is Rs 33,000 crore. “It is a demand-driven programme, and the decline may not necessarily be a bad indicator. A decline in employment provided may suggest that MGNREGS beneficiaries have moved away from the scheme,” says Jairam Ramesh, rural development minister. But not many buy the logic.

“There are many reasons for the slowdown... especially in the past two years, but certainly not because of a lack of interest in the programme,” says Reetika Khera, a Delhi-based development economist. “In most places, people are desperate for their entitlement; in many places, they feel that even 100 days are not enough.” Khera says MGNREGS has been burdened with too many innovations — E-Muster Rolls (an IT-enabled technology) in some places, making Aadhaar de facto compulsory; cha­nges in the list of permissible work that need new technical estimates to be drawn up; and so on.

Rural development ministry officials admit that there have been delays in payments in some regions. “The scheme does have administrative challenges. Connectivity issues remain; but these are not MGNREGS-specific,” says an official, adding, “Release of funds is linked to the data provided by local bodies. It is also linked to social audits. If there are serious complaints with regard to the utilisation of funds, fresh funding will have to be stopped.” Standard operating procedures followed while addressing such complaints will lead to a pause in the flow of funds.

Remuneration Woes
“Lack of awareness among workers about their right to demand a job is part of the problem — and the government has done little to fix this,” says Khera. Another reason for the slowdown in demand is delayed payment of wages, she says. Even government data shows that up to 25 per cent of wages is delayed; some by up to 3 months, Khera points out. “Put yourself in the shoes of these workers — if you are not paid for three months, will you not suffer?”
break-page-break
It’s not just the delays, but also their unpredictability that hurts, says K.S. Gopal, a social scientist who has been closely following MGNREGS. He feels too many changes, including the introduction of IT-based tools for capturing data in villages, are strangling the system as most rural areas do not have the required administrative capabilities.

But the government does not feel the decline in demand is solely due to such administrative issues. In fact, the internal analysis carried out by the rural development ministry points out that 50 per cent of the MGNREGS beneficiaries in category IV — covering works on private land belonging to Scheduled Castes, Scheduled Tribes, small and marginal farmers, etc. — have not sought re-employment.

“This may indicate these households have moved back to farming on their own land as a result of land development under MGNREGS, or have alternative livelihood opportunities,” says Ramesh. “This would be a step in the direction of moving from unskilled manual labour to skilled farming practices.”

Gopal feels the argument that people have better options is not true. “Workers are very much available. But the government is unable to supply them jobs. Inefficiency and incompetence at the grassroots level is rampant.”

Activists also allege that the officially recorded number of demands made by households is not correct as many of the demands made by poor labourers are not recorded by local bodies. “If authorities acknowledge that they cannot provide work to people who are eligible, they will have to give unemployment wages to them. They do not want to do that,” explains Gopal.

Half Full, Half Empty
While the slowdown is apparent in states such as Bihar, Raja­s­than, Madhya Pradesh, Karnataka, Assam and Gujarat, there are others that buck the trend. Kerala, for instance, has seen consistent increase in the demand over the past five years — in 2008-09, 0.7 million households demanded work, and this rose to 0.95 million, 1.2 million and 1.4 million in the years that followed. This year, the demand has already crossed 1.6 million. On an average, 33 per cent households that received work were given 100 days of work too.

Tamil Nadu performed even better. It saw the demand steadily increasing from 3.4 million in 2008-09 to 6.4 million in 2011-12. This year, the number of households that demanded work under MGNREGS has crossed 6.6 million already. Over 40 per cent of the households that are beneficiaries of the programme in Tamil Nadu were given 100 days of work. “Kerala and Tamil Nadu are states where both political will and administrative capacity exist to implement MGNREGS. This means delays are fewer in these states, and that also contributes to making MGNREGS popular there,” points out Khera.

She feels the glass is half full and half empty. “MGNREGS has provided economic security and dignified work to the poorest of the poor; it has contributed to empowering women.” In some places, she says, good assets have been created. “Wells (Jhar­khand), roads and fruit trees (Chhat­tisgarh), desilting of canals (Tamil Nadu), de-weeding of ponds (Kerala) and land-levelling are some of the good works,” says Khera.

“The data reporting for muster rolls filled in December 2012 is still open and, with some states yet to complete data entries in this regard, this number may still go up,” says an optimistic Ramesh.

Any increase in demand needs to be matched by job creation. Introduction of new technologies should bear in mind the administrative capabilities of local bodies. Uncertainties regarding payme­nts should be removed. There are many challenges, and if it manages to overcome them, the UPA can continue to bank on its flagship programme.