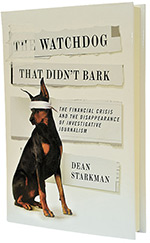 02 December, 2014
Print this article Font size -16+
Ever wondered how the ceo of a company that is just about to list gets on TV to talk about everything under the sky as the person’s name and the company’s name flashes on the ticker? How is it that a group of business journalists discuss an IPO for hours before it opens? Accident or paid news, scoop or journalism — why are total strangers speaking on first terms about billions of dollars that is not theirs?

Familiarity breeds access and that kind of access leads kills news where nothing is an accident and information is placed like products. If you are looking for a ready-reckoner on the dangers of journalists and heavy hitters from the corporate world feeding off each other, your search ends with one book: Dean Starkman’s The Watchdog That Didn’t Bark: The Financial Crisis and the Disappearance of Investigative Journalism.

It is the story of American journalism told through the prism of how the Fourth Estate failed to report on the 2008 financial crisis on Wall Street that rocked the world.  If it rings a bell, it should — the book could as well have been written about some sections of the Indian media where the line between business and editorial has disappeared to the detriment of the latter.

Starkman himself a distinguished member of the Fourth Estate, spares no punches. He names people, quotes incidents and news gathering styles that he says are predatory and corrupt. The tome is a disturbing account of how journalism in America played second fiddle to corporate interests to arrive at what he calls the “CNBCization” of news — short hand for breathless reporting of numbers, packaged interviews and occasional live and phone conversations with CEOs timed with market openings around the world, especially the the New York Stock Exchange (NYSE). The solution is a return to good old muck-raking, digging and asking all those questions without wondering if you get invited to the next party or a ride on the private jet of a CEO to Davos or Timbaktu.

Why and when did journalists in New York start eating out of the hands of the corporate world? Why did they write what they were being told to instead of asking why information was being offered to them on a platter? The book reads like a thriller telling the story from the perspective of a people’s editor, pesky, irreverent and difficult — all anathema to the journalism of the 1990s where Starkman says the middle-classes started investing in the stockmarkets so newsrooms began the process of accommodating them.

For the author, a fellow of the Columbia Journalism Review, who packs the punch of 30 years as a journalist — ten each as an investigative journalist and business reporter — divides journalism into two broad categories, both diametrically opposed to one another. One is accountability reporting, which is what a watchdog is expected to do and the other is access reporting which is business-friendly to the point of becoming blind to corruption and corrupt practices. In the specific case he discusses, Starkman says the system that mainstream media was covering “…was going to hell in a hand basket” and journalists were so close to it, they did not or did not want to see it.

It took Michael Hudson, an urban affairs editor of the Southern Exposure (an alternative weekly from Pittsburgh) seven months of investigation and more than a 150 interviews to conclude with documentary evidence that sub-prime operations were raking in billions in “ill-gotten gains by targeting the consumers who can least afford it.” Some of the world’s best pieces of journalism have the humblest of beginnings with questions being asked as simply as they must — why, who benefits, who is saying it, etc., etc.

The template for access reporting became mergers and acquisitions (M&As) on which scoops were based while accountability stories looked for information on people, not about them. Somewhere along the line, the CEO journalist was born, accountable no more to people, but to corporations where what people said became more important than what they did. Starkman says that whatever journalism emerges from the digitalisation of news and news gathering it will have to be accountable “…because without accountability reporting, journalism has no purpose, no center, no point.”

It is impossible to disagree.

Subramaniam is Editor-in-Chief, The News Minute. She was the lead reporter in the Bofors-India story that spanned three countries.