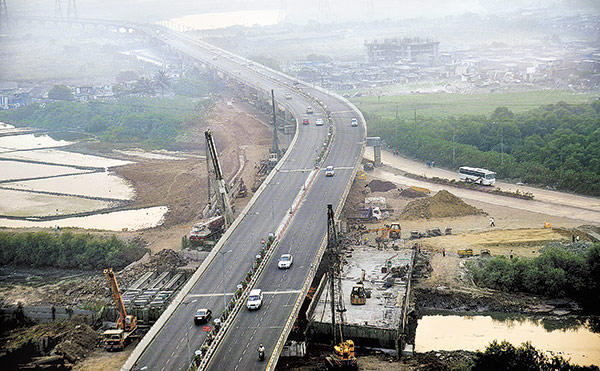 08 November, 2014
Print this article Font size -16+
Mumbai had many things going for it in the year gone by. Several infrastructure projects were launched — or are close to opening. The 14-km Eastern Freeway that runs from South Mumbai to the eastern suburb of Chembur has opened, providing a quick exit and entry point to those commuting by car from the satellite towns of Navi Mumbai, and the more distant Pune. Then, the much-needed flyover connecting the suburbs of Santa Cruz and Khar to the Western Expressway and the airport was finally inaugurated.

The first leg of both the monorail network and the Metro is complete and they are ready to go. In the first phase — Chembur to Wadala — the monorail will have a run of 9 km. The Metro’s first phase, Versova on the coast to Ghatkopar, will create the first east-west corridor for the city. Having missed six deadlines, the Santa Cruz-Chembur Link Road, a double-decker flyover — a 6.5-km link between Mumbai’s eastern and western suburbs — is now ready.

These projects, worth some Rs 6,500 crore, have helped keep Mumbai at No. 2 in the City Competitiveness Index of 50 cities across India. Delhi beat Mumbai by a whisker. While Delhi scored 69.89, Mumbai was just a fraction of a point behind at 69.88. Expectedly, Mumbai topped in financial infrastructure and in terms of access to high quality business inputs, including natural and human resources and capital availability. However, it fell behind in ‘administrative’ performance — a poor show at No. 26; and was also marked down in ‘physical’ outlook, where it stood at No. 7.

The old ‘inner city’, bounded by the sea, has a sprawl of just 603 sq. km and houses more than 12 million people. The key to the city’s survival and growth lies in connecting to the hinterland by a network of roads and rail corridors; to the new towns in the extended metropolitan region. A crucial project to serve this end is the Sewree-Uran Sea Link, a 22-km sea bridge connecting the district of Raigad to the city. It will also provide access to a new airport at Navi Mumbai.

Within the city, where long commutes are a way of life, the Rs 24,340-crore Metro phase-II will connect Nariman Point in the south to Bandra-Kurla Complex — two key commercial hubs — and then go north to the international airport and Marol industrial centre. Expected to carry around 22 lakh commuters daily, it will ease the pressure on Mumbai’s overcrowded trains. But, nobody has a clue to when the project will start — and its completion date.

Mumbai’s nearly 150-year-old industrial past has given it a work culture and access to human resources that can scarcely be rivalled. However, for want of investment and administrative bungling, the city has seen little modernisation. The roads are a mess and every monsoon the city shuts down. Mumbai’s famous storm water drains are of British vintage. Good residential property is exorbitantly expensive. “A lot of talent is leaving this city because the quality of life is poor and too expensive,” admitted Maharashtra chief minister Prithviraj Chavan in an earlier interview with BW|Businessworld.

Key to building a modern city is providing good transport infrastructure, including mass rapid public transport and a network of roads and bridges that allow people to commute easily and quickly. And, expanding the urban sprawl to take the pressure off the city’s inner core. Can the government come up with a workable plan for affordable housing in satellite towns?

There is a plan for a multi-modal corridor, 126-km long, that will run in a semi-circle, skirting the city, from Virar in the north to Alibaug, south of Mumbai. It will connect the towns of Bhiwandi, Kalyan, Dombivili and Panvel. The Rs 10,000-crore corridor will have eight lanes; with dedicated lanes for buses, two-wheelers and non-motorised transport. The corridor will become a magnet for alternative and modern city development, the government is hoping. Again, nobody knows if the plan will materialise and, if so, how long it will take for fruition.