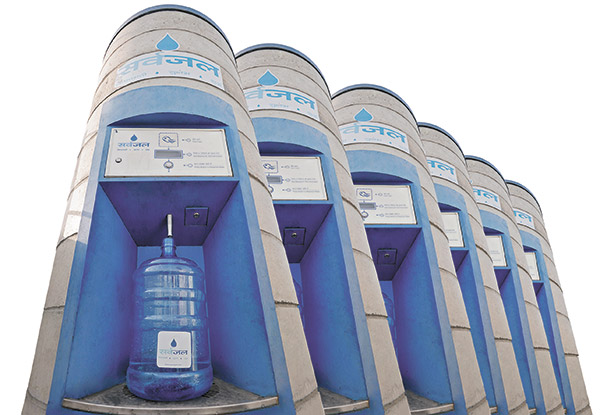 08 November, 2014
Print this article Font size -16+
Over the past few years, Sarvajal has set up 77 ATMs in urban slums and semi-urban hamlets. By the end of the current financial year, it plans to have at least 135 ATMs, though it is pitching for a big contract which, if approved, could take the number to as high as 500. Sarvajal’s ATMs do not dispense cash — they dispense clean drinking water. You put a note in a slot and collect water of equivalent value.

Sarvajal started out as a CSR experiment by the Piramal Group. But it was soon turned into a full-fledged for-profit business — dispensing purified drinking water to the urban and rural poor. There are a few others, including Spring Health and Waterlife India, who are also exploring the opportunity at the bottom of the pyramid. While they have not made big profits yet, they believe the potential is huge.

Supplying clean drinking water to cities is a problem that municipal corporations are grappling with. This is the reason why several state governments are looking at private-public partnerships.

In urban areas, water entrepreneurs target the rich and the middle class through two channels — purifiers and packaged water. The first is a Rs 1,864-crore business with half a dozen established players, while the latter is estimated to be over Rs 10,000 crore with 200-odd players.

Outfits like Sarvajal, Waterlife India and Spring Health are trying something different. They are working on decentralised low-cost models to supply drinking water to rural areas, urban slums and to the very poor.

This business has attracted bouquets and brickbats in equal measure. Critics believe these companies are trying to make a fortune from the government’s failings; it is, after all, the job of the government to ensure that everyone in the country has access to reasonably clean and uncontaminated drinking water. Supporters, on the other hand, say this is the only way to ensure the poor have access to potable water — something that is presently out of their reach.

Growing awareness has made the urban and rural poor realise they need uncontaminated drinking water, and they are ready to pay for it, says Sandhya Singh, former joint director in the ministry of drinking water. This, in turn, has opened the doors for private players, she says.

“The government has been unable to fulfil its mandate in over seven decades, and that is why the entry of the private sector is an absolute must,” says Rajesh Sharma, CMD, Ion Exchange, which offers various kinds of water purification technologies. According to him, the water purification segment’s penetration — currently at 4-5 per cent — is increasing at 25 per cent a year. Putting the size of the market at close to Rs 20,000 crore, Sharma believes that fears of profiteering by the private sector can simply be addressed by ensuring accountability, putting in place a regulatory authority and through community participation.

Ranen Banerjee, partner, PwC India, agrees that the potential is huge. He says the entry of private players into the business of supplying purified water to the poorer sections is driven by demand. “Awareness and aspirational levels in the country have risen dramatically in the last decade, but to offset this demand, the government has failed to ensure service delivery.”

Solution For A Price
Girija Bharat of The Energy and Resources Institute laments the failure to devise a rational pricing mechanism for water in India. Instead, it is provided free or subsidised. “Water is an attractive means for politicians to appeal to voters. As a result, it falls prey to the wheeling and dealing of vote bank politicians who fail to address the main issue of providing water.”

But, in reality, pricing is not an issue. “We have not seen any resistance to pay among consumers — if we ensure quality and consistency,” explains Jacob Mathew, director, Spring Health.

Industry players believe they can reach out to anywhere between 2 million and 10 million people in the next 10 years as increased contamination in water has left little choice for rural regions. Says Anuj Sharma, chief operating officer, Sarvajal, “Our simple hypothesis is that individual consumers buying water purifiers will always work out to be more expensive than community solutions.”

Founded in 2008, Sarvajal was started with the aim of addressing the root cause of diseases, explains Anuj Sharma, adding that the most common illnesses are water-borne. As a subsidiary of the Piramal Group, the mandate for Sarvajal was clear right from the start — “create a sustainable and self-perpetuating system that can hit at the root of various diseases”.
break-page-break
To promote a market-driven water solutions model, Sarvajal partners with entrepreneurs, companies, philanthropic organisations and non-profit agencies. It has set up self-service kiosks that dispense water in exchange for cash or pre-paid cards. Around 10 litres of treated water come for Re 1. Intended as a for-profit system, the current prices are much lower than water pouches, bottled water or cans that cost anywhere between Rs 5 and Rs 65.

In November 2013, the company launched a pilot of 15 such units in a slum in Delhi. Following its success, in May 2014, Sarvajal was mandated to expand to 500 units across the capital by Lieutenant Governor Najeeb Jung. While it has many satisfied consumers, there are some who are unwilling to pay even nominal rates for the treated water. After the initial novelty wore off, the project saw the support of slum-dwellers dwindle. The company has, so far, sold only a thousand prepaid cards of Rs 100 denomination to a colony with close to 9,000 families. But both Delhi Jal Board and Sarvajal are convinced that the project needs more time.

Spring Health and Waterlife India offer similar services. Says the Waterlife spokesperson: “The revenue stream ensures the solution is self-sustaining.” To illustrate, he cites the example of their pilot in Maharashtra that has led to the birth of almost 20 such units in neighbouring areas.

In the village of Mandavgan Farata, for years newborns acquired a bluish pigmentation and adults complained of chronic stomach pain due to the high nitrate content in their main water source —  the Bhimani river. So, when the company went to the village with a proposal to treat the river water, the population was ecstatic. The panchayat also offered free land to set up the project, says Jaidutt Sharma, project head, Waterlife India.

The reverse osmosis (RO) unit, deployed by Waterlife India, dispenses over 1,000 litres of purified river water every day. On average, it operates for five hours a day, and the water is sold at Rs 5 for 20 litres.
The National Bank for Agriculture and Rural Development (NABARD) provided the initial capital of around Rs 10.5 lakh, which is expected to be paid off within five years. Additionally, the plant will be handed over to the panchayat once the loan is paid off. The commercial water dispensing units of Waterlife come with different revenue-sharing models, depending on the funding source.

One Size Does Not Fit All
Sarvajal uses RO systems to purify water. Spring Health chlorinates water. And Waterlife employs a mix of technologies. Different techniques, but the same goal — purified water for a small price.

According to Mathew, RO is expensive and wasteful. A smart design, coupled with a business plan and adequate capital, can create ‘transformatory’ solutions, he believes. He says treating 100 litres of water through an RO system leads to the wastage of close to 60 litres on average, whereas in chlorination, no water is wasted. “It is important to remember that Spring Health’s purification technique is not applicable universally and can only flush out bacterial contamination, not chemical or mineral impurities,” he adds.

Terming Spring Health a “for-profit social enterprise”, Mathew says their focus is densely populated regions with high water content such as Bihar, parts of Jharkhand, Chhattisgarh and UP. Spring Health caters to 1,25,000 people at present. “The company is growing at the rate of 25 villages per month, touching approximately 600 households every month,” says Mathew.

Mathew claims setting up RO units for 100 villages would cost around Rs 5-8 crore, but for chlorinating the same volume of water, the cost would be around Rs 35 lakh. Though chlorination is often frowned upon as an outdated purification technique, many villages are readily accepting Spring Health’s units. “RO water is not a necessity in every part of the country, and given the expenses, chlorination works better,” says Mathew.