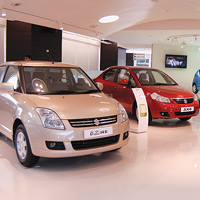 Analysts expected a net profit of Rs 485 crore for the quarter on revenue of Rs 10,110 crore, according to Thomson Reuters I/B/E/S.

Maruti faces months of supply woes and a slump in market share and sales as a lockout at a key factory enters its second week after violent clashes between workers and management left one company official dead.

The shutdown at the Manesar plant threatens a replay of a dismal 2011 when labour unrest battered the company's sales, market share and profit.

The results released on 28 July are for the three months to end-June, and as such are not affected by the shutdown.

The latest labour problems add to Maruti's woes at a time when it is fighting an industry-wide slowdown in sales as the Indian economy grows at its slowest pace in nine years, while a weakening rupee has made it even worse for an industry that depends on imports for key raw materials.

Maruti shares, valued at $5.8 billion, are down more than 9 percent since it announced the shutdown of the Manesar plant on July 18. The stock closed 0.4 percent higher on Friday, underperforming a 1.1 percent rise in the broader market.