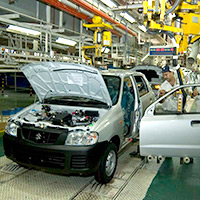 08 November, 2014
Print this article Font size -16+
Maruti Suzuki India will seek minority shareholder approval to set up a plant in Gujarat as a unit of Suzuki Motor Corp, after the proposed move drew opposition from the company's leading institutional investors.

"Even though not required by law, the board decided, as a measure of good corporate governance, to seek minority shareholders' approval," the company said in a statement after a board meeting on Saturday.

It added that in case of mutual agreement to terminate the contract manufacturing agreement, the facilities of the Gujarat plant would be transferred to Maruti at book value.

Suzuki Motor Corp, which owns 56 per cent of Maruti, in January announced plans to invest $488 million in a new plant in India, shelving an earlier plan for Maruti to set up the factory itself.

The move has been opposed by institutional investors of Maruti.

In a letter to Maruti management dated March 5 and seen by Reuters, a group of 16 big fund managers said the plan would shift manufacturing activity away from the Indian company and turn it into a "shell company" of the parent.

Maruti also said on Saturday the entire capex for the Gujarat project would be funded by depreciation and equity brought in by Suzuki.