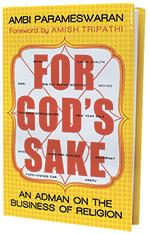 08 November, 2014
Print this article Font size -16+
What business does an adman have looking at the business of religion? That was the first thought that struck me when I saw For God's Sake (Penguin India). Ambi Parameswaran has always come across as a very serious writer. He has a somewhat scholarly air to his writing style, which in earlier books strayed into the domain of the academic. For starters, the book really looks at religion and the business that has been woven around it. The symbols of religion like the Bindi and what has happened to this sacrosanct dot. The business of festivals and marriages that have assumed the role of specialised activities. The birth of small opportunities like Karva Chauth and Akshaya Tritiya that have morphed into huge marketing ideas.

I recall sitting with Ambi in Goa and asking Swami Sukhabodhananda how he explained the growing queues outside places of worship. Could it be a great surge of faith? He barely paused and said: “A growing population”. Ambi’s explanation for all the factors he tackles is less simplistic and more logical. And that provides the reader with something solid to read. The way he stirs the pot with a dash of humour, some very apt quotes and some good old-fashioned research is what makes the book a winner all the way.