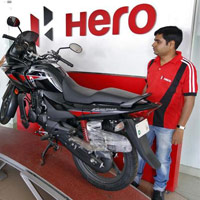 08 November, 2014
Print this article Font size -16+
New markets and new segments have always been reason enough to grow inorganically for most companies. And why not, epecially if your competitor too has followed a similar path. It's only been a few months since Bajaj Auto, the country’s second largest two-wheeler maker, acquired controlling stake (47%) in KTM, the Austrian dirt bike maker. Now, Hero Motocorp on 1 July acquired 49.2 per cent stake in Erik Buell Racing (EBR), the US-based niche segment bike manufacturer.

Auto sector analysts are clear about the reasons behind this acquisition -- the lure of the segment for Indian bike makers, which is  access to a new market and more importantly, access to technology. According to Abdul Majeed, head automotive practice at PricewaterhouseCoopers, the Erik Buell acquisition is important for Hero given the fact that the company has in the past made a stated objective to become a global player. “There isn’t any local or global now, they have to be present across markets if they have to grow, and organic growth takes time and effort, while acquisitions like this one gives them immediate access to market intelligence, and more importantly to technology,” says Majeed.

Majeed’s perspective mirrors what Pawan Munjal, managing director and CEO, Hero, said in Delhi when he announced this acquistion. “The equity partnership with EBR is reflective of our long-term vision of transforming Hero MotoCorp to a truly global two-wheeler major with footprints spread across continents, offering a wide range of technologically advanced two wheelers," said Munjal.

Hero has bought the 49.2 per cent stake in Erik Buell for $25 million. While the first tranche of $15 million was invested by Hero MotoCorp Ltd (Hero), the remaining $10 million will be invested in the next nine months. Interestingly, no management changes are expected at EBR as a result of the acquisition. Buell and his wife retain ownership of the remaining 50.8 per cent stake. Buell will also continue to head the company, while Hero will get a two-member representation on the board.

Munjal also acknowledged the fact that markets like the US and other developing countries are dominated by engines much bigger than Hero currently makes. He, however, pointed out that there is a market for the smaller engine bikes in these countries as well. “Smaller engines can be sold in America," he Munjal.