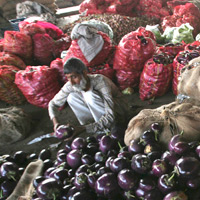 08 November, 2014
Print this article Font size -16+
Declining price of vegetables pulled down inflation to over three-year low, which may prompt the Reserve Bank to consider a rate cut in its annual monetary policy next month.

The encouraging inflation data was released as Finance Minister P. Chidambaram was set to begin a series of roadshows in North America aimed a drawing billions of dollars of investment. Foreign investment inflows are needed to help fund a gaping current account deficit that has emerged as a worrying faultline in Asia's third largest economy.

Wholesale prices, India's key inflation measure, cooled to 5.96 per cent in March after an annual uptick to 6.84 per cent in February, the lowest rate since November 2011 and less than forecast by a Reuters' poll of economists.

"Odds for a rate cut in May have risen after today's numbers," said Radhika Rao, an economist with DBS in Singapore.

"The RBI will be in a tough spot as the recent deterioration in the current account position warrants rates to be left high to cool the economy, though the softer inflation numbers provide a window to ease with an eye on supporting the faltering growth outlook," Rao said.

Wholesale inflation has trended downwards from 8 per cent in September.

A Reuters snap survey of analysts, made after the release of the official data, showed closely watched core inflation, which strips out volatile food and fuel prices, slowed to around 3.5 per cent in March, the slowest rate in more than three years.

The lower-than-expected headline inflation briefly buoyed the stock and bond prices as investors read it as a sign the central bank was more likely to cut rates when it next reviews policy on 3 May.

The markets' gains, however, were shortlived as investors reacted to an upward revision to January inflation to 7.31 per cent from 6.62 per cent.

The benchmark BSE Sensex immediately extended gains to stand up 0.5 per cent from 0.3 per cent before the data was released, but fell back on the January revision.

India's benchmark 10-year bond yield initially dropped 3 basis points to 7.82 per cent on the March inflation data, but the revision to January prompted investors to trim their positions.

The RBI has made two 25 basis point rates cuts this year in response to cooling inflation, but is concerned that if it lowers rates too much it might undermine the rupee.

The current account deficit leapt to an all-time high of 6.7 per cent of GDP in the December quarter. A high current account deficit is potentially inflationary because it can lead to a weaker currency and more expensive imports. Some economists believe India could also benefit from inflows of funds unleashed by a mega-monetary easing in Japan earlier this month.
Tags assigned to this article:
economy india inflation rbi wpi top 1 food prices monetary policy vegetable prices