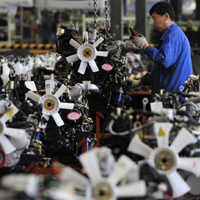 India bucked the gloomy trend, with factory activity growing at its fastest pace in eight months. Unlike most of its Asian peers, India's economy is primarily driven by domestic factors and it is far less exposed to flagging export demand.

The PMI reading of 57.5 in January, marking almost three years of expansion in the manufacturing sector, brought some cheer to an economy hurt by monetary policy tightening and the government's policy paralysis.

Analysts have cut their forecasts for the Indian economy and now expect it to grow at its slowest pace in two years in the 2011/12 fiscal year, a Reuters poll showed. The economy grew 6.9 percent in the quarter ended September 2011.

No Major Policy Shifts
The factory activity index figures out of Asia underscore the region's vulnerability to the crisis in Europe and the need for policymakers to shield their economies by boosting domestic demand.

"It is necessary and also possible for us to continue to implement a proactive fiscal policy," he said.

Xie said that his ministry would provide more fiscal support to small-to medium-sized enterprises and step up efforts to cut taxes for some selected sectors to restructure the economy away from exports and towards domestic consumption.

China's economy grew at its weakest pace in 2-1/2 years in the latest quarter and might head for an even sharper slowdown in coming months. Xie said inflationary pressures in China remain strong, an indication that policymakers are unlikely to drastically ease policy any time soon.

In South Korea, still-elevated inflation at a time when Asia's fourth-largest economy is weakening leaves the country's central bank with little room to change its interest rate policy for the next several months.

The Bank of Korea's head of inflation research team, Lee Jae-rang, told Reuters it was premature for the authorities to be complacent about inflation, adding pressures will remain high for the time being.

In India, the survey also showed price pressures remained firmly in place as input costs grew at a faster pace than in December.

"These numbers suggest it's premature for the RBI to cut policy rates and that they have to await evidence of a significant and sustained decline in inflation and/or further materialisation of down side risks to growth before they can roll out rate cuts," said Leif Eskesen, economist at HSBC.