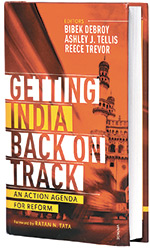 08 November, 2014
Print this article Font size -16+
When Prime Minister Narendra Modi launched this book in his office on 8 June, he announced a new credo for the government: skill, scale and speed. As a functional objective, this is exactly what India needs. While previous governments promised such ideals in the past, few could go beyond slogans and mottos.

While political leadership kept up its flow of promises, successive governments muddled along with little capability, clarity and commitment. By launching this Carnegie Endowment for International Peace (CEIP) book, Modi has committed himself to action that goes beyond catchy slogans. “Liberal democracy kept India together, but the leadership failed India. Empowerment of people was replaced by entitlement. Indian socialism created paternalistic, controlling and inefficient state,” writes Ashley J. Tellis, senior associate at CEIP.

The book lays out steps that will bring accountability in government while creating a state that allows market efficiency to deliver growth. The 17 chapters in the book have been written by various experts and cover a wide range of issues critical for reviving growth. These include administrative deficit, macroeconomic stability, revamping agriculture, modernising transport, managing the environment and rejuvenating foreign policy.

The book eschews pedantic and theoretical debates that characterise  most tomes by academics. Instead, it takes a granular approach to identify specific steps that governments must take. Each of the recommendations by the authors is backed by well-argued logic, facts and research-based insights.

Bibek Debroy, professor at the Centre for Policy Research, has forcefully argued for decentralisation. India has reached a stage where deeper reforms cannot be implemented without the participation of states. He calls for dropping the Concurrent List, expanding the State List, and creating a local body list.

Ashok Gulati, chair professor for agriculture at ICRIER, explains that the key difference between the growth path of India and China was the focus on the farm sector. “China began its reform process in 1978 primarily with agriculture...liberating price controls to a large extent. India started...with trade and industrial policy.” As a result, Indian agriculture has never reached even 4 per cent growth. Gulati seeks freedom for farmers to get market prices for their produce. He favours delisting of fruits and vegetables from the APMC Act to tackle food price inflation.

Other contributors such as Surjit Bhalla, Omkar Goswami, C. Raja Mohan and Rajiv Kumar have laid out sharp suggestions for change. Modi would do well to recommend this book to ministers and officers in charge of delivering the change that he has promised.

The reviewer is consulting editor with BW | Businessworld