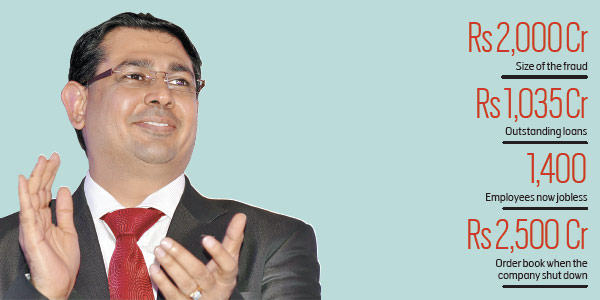 08 November, 2014
Print this article Font size -16+
Sunil Kakkad, the promoter of Ahmedabad-based SIS, and an accused in the Rs 2,000-crore fraud that left Gujarat's biggest IT firm bankrupt and its 1,400 employees jobless, was detained in Nigeria on Thursday, June 26.

The Gujarat police are coordinating with the state CID (crime) to bring Kakkad to Ahmedabad on Sunday (29 June). A senior police officer with Gujarat police confirmed that Kakkad was detained in Nigeria following a tip-off from Interpol. “He (Kakkad) could either be extradited or deported to India on Sunday,” the officer told BW|Businessworld from Ahmedabad.

Sources say that the police had put phone numbers of everyone who were close to Kakkad under watch. Earlier, Gujarat police had even sought Interpol’s help to nab him. Kakkad was on the run since June 27, 2013 and police had last traced his whereabouts to Dubai through his cell phone records.

SIS, which was pegged to be Gujarat’s biggest IT companies and which was preparing to get listed, went bust in 2013 leaving its 1,400 employees jobless.  The company has outstanding loans of Rs 1,035 crore from a consortium of nationalised banks headed by State Bank of India (SBI). However, some employees allege that banks have lent more than Rs 2,000 crore to SIS which would now be treated as bad debts on their books. Manoj Bhagchandani, former national head of

business development with SIS, in a letter to the Gujarat chief minister, alleges that loans disbursed to SIS were siphoned off. He says banks lent Rs 2,084.2 crore between May 2012 and June 2013.

BW had earlier reported about SIS fraud in January this year. Some of the former employees say that a couple of top officials who worked for Kakkad may also be brought to book following the arrest. All eyes would be on how the state government deals with the biggest corporate fraud since the Satyam saga. The former employees of the company had alleged that the state machinery was too slow to react that led to Kakkad’s escape. The police had filed the complaints
about three months after Kakkad escape that too following a lot of pressure from the jobless employees.