Mamata Pulls Out Of UPA Govt 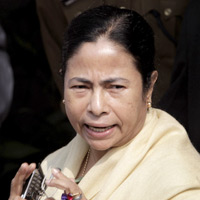 08 November, 2014
Print this article Font size -16+
The UPA government went a step closer to mid-term polls on 18 September and the latest series of 'Big Bang' reforms became uncertain after UPA ally Trinamool Congress leader Mamata Banerjee withdrew support to the government on the issue of diesel price hike and FDI in retail. She said if the Congress compromised on LPG and diesel price decisions and withdrew retail FDI, she will consider her decision.

The way UPA is functioning is not aceptable to us. We have not got the minimum of respect from the UPA government. Saying "UPA didn’t consult us before fuel price hike", Mamata Banerjee announced withdrawal of support from the UPA government. She said her ministers will go to Delhi and put in resignation papers on 21 September.
"We are doing this only because of the people," Banerjee told reporters after a Trinamool Congress meeting in Kolkata.

Banerjee's move may not endanger the ruling coalition, with the UPA expected to muster up a parliamentary majority. However, both Samajwadi Party and Bahujan Samaj Party are considered to be even more unreliable than TMC.

After months of dithering on the economy, India's beleaguered government roared back to life in dramatic fashion last week, announcing big bang reforms as part of a package of measures aimed at reviving growth and staving off a ratings downgrade.

Apart from sharply increasing the price of heavily subsidised diesel, the government said it was opening up its supermarket sector to foreign chains and would allow more foreign investment in airlines and broadcasters. It also approved the sale of stakes in four state-run industries.

Ahead of the crucial meeting of Trinamool Congress (TMC) parliamentary party, prominent leader Saugata Roy on 18 September had  indicated that party could pull out its ministers from the Union council of minister if its  rollback demands on FDI in retail, cap on LPG subsidy and diesel price hike were not met with.
There are six ministers belonging to the Trinamool Congress in the Union ministry. The ministers are minister of railways Mukul Roy (Cabinet rank), the other five are ministers of state. They are minister of urban development Saugata Roy, minister of health and family welfare Sudip Bandyopadhyay, minister of information and broadcasting Choudhury Mohan Jatua, minister of tourism Sultan Ahmed and minister of rural development Sisir Kumar Adhikari.
"Hard decisions would be taken if the Centre does not accede to the demands (of Trinamool Congress). There will be no soft compromise. We do not bark but we also bite".
The 19-member Trinamool Congress, which is the second largest constituent of the ruling UPA alliance after the Congress party, held a 3-hour-long high-level meeting at the Town Hall in Kolkata to discuss if it should pull out of the Union government.
Earlier, on 17 September, Party chief Sonia Gandhi held consultations with senior leaders, including ministers, at her residence to decide the strategy ahead even as there was no sign of worry in the AICC over fresh pressure mounted by Mamata Banerjee.
With Banerjee holding a meeting with her party leaders in Kolkata, Gandhi had a strategy session with Union Ministers A K Antony, P Chidambaram, Sushilkumar Shinde, Ghulam Nabi Azad, Vayalar Ravi and Gandhi's Political Secretary Ahmed Patel.
"Negotiations are going on...we do believe that we will be able to have a working relationship. We remain optimistic," party spokesperson Renuka Chowdhary told reporters at the AICC briefing on 17 September.
Asked whether Congress is confident that all its allies, including Trinamool Congress, will remain in UPA government in future as well, she said "we will always be hopeful of all our allies' continuance. Our doors are never closed for dialogue".
Over the past year the government has rolled back increases in petrol prices and rail fares. Most dramatically, Singh ditched an attempt to push through retail reform after mayhem in parliament and street protests led by his party's largest coalition partner, West Bengal Chief Minister Mamata Banerjee.
Banerjee told Reuters in May that she would never support the likes of Wal-Mart Stores Inc <WMT.N> opening supermarkets in India, and on Friday she gave the government a 72-hour deadline to backtrack. She led a large protest on Saturday and suggested her party was seriously considering leaving the coalition.
However, there are reasons to believe that Singh and Gandhi will ride out the storm this time.
The economic crisis is far deeper than last year and a U-turn now would seriously discredit their efforts to salvage it. As in 1991, when India was close to bankruptcy, reforms came - and stuck - only when a gun was put to its head.
"Go Ahead With Everything"
With its popularity down due to corruption scandals and the economy, the Congress party may be hoping to win back middle-class voters by acting now and hoping to have the spending power to win over rural voters on time for an election due in 2014.
"There could be a period of turbulence but we are confident of a safe landing," commented a senior Congress Party source, who said neither Gandhi nor Singh were in a mood to reverse the decisions they had made. "We can live without Mamata."
In the two weeks leading up to "big bang Friday", Singh and Finance Minister P. Chidambaram met Gandhi several times to explain the gravity of the economic situation. Together, the two veterans - Singh the economist and Chidambaram the lawyer - built their case.
Gandhi was told that without high growth India simply could not afford subsidies or the food welfare scheme she is determined to roll out for the country's millions of poor.
"On Wednesday (13 September), in the last Core Committee Meeting, it was decided 'let's go ahead with everything'," a source close to Singh said, recalling the moment when the reform argument won.
"Finally the message has struck home that you have to grow the pie, rather than just talk about dividing the pie," said political analyst Subhash Agrawal of think-tank India Focus.
The political roller-coaster of the next few days will yet decide whether that party meeting becomes a defining moment in Indian history, or merely a footnote.
Tags assigned to this article:
top 1 p chidambaram mamata banerjee upa fdi trinamool congress sonia gandhi congress party diesel price hike union finance minister reforms 2