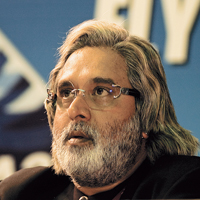 08 November, 2014
Print this article Font size -16+
Liquor baron Vijay Mallya on 26 October' 2012 thanked 'the Almighty' for losing the billionaire status, and hoped that it would lead to "less jealousy, less frenzy and (less of) wrongful attacks" on him.
Often referred to as 'King of Good Times', Mallya has slipped out of the billionaire league in the Forbes rich list, as "bad times" in his aviation business have dragged down his networth to below the $1 billion mark.
According to the business magazine's latest list of 100 richest people in India that was published yesterday, Mallya is now ranked 73rd with a fortune of $800 million (about Rs 4,285 crore) -- a sharp plunge from 49th place last year with a fortune of $1.1 billion.
Reacting to the new list, Mallya tweeted this morning: "Thanks to the Almighty that Forbes has removed me from the so called Billionaires list. Less jealousy, less frenzy and wrongful attacks".
Mallya still ranks well above Naresh Goyal of Jet Airways, who has been ranked at the 94th position with a fortune of $600 million.
Cash-strapped Kingfisher Airlines, part of Mallya-led UB Group, is going through the turbulent time for several months now and had to halt operations earlier this month.
"King of good times is having nothing but bad times lately. His (Mallya's) Kingfisher Airlines, weighed down by what is believed to be $2 billion in debt, had its license suspended in mid-October after it apparently failed to address Indian regulator's concerns about its ability to operate," Forbes had said yesterday.