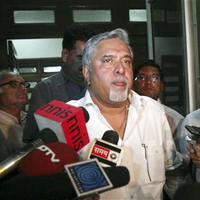 08 November, 2014
Print this article Font size -16+
Liquor baron Vijay Mallya has filed a petition in the Bombay High Court against the lenders to his grounded airline Kingfisher for selling a portion of the pledged shares of United Spirits (USL) worth Rs 100 crore, according to banking sources. The case is listed for hearing at the court of Justice JS Kathawala in the Bombay High Court tomorrow.

The petition, filed by UB Holding in the High Court, seeks a stay on sale of shares of its subsidiary USL by SBI after the bank sold a portion of UB shares it held as security in the market last week, said an SBI official who wanted not to be named.

"We have sold a part of the USL shares. We have also received a legal notice from UB Holding restraining us from doing so. But despite that, we decided to sell them and are likely to sell the remaining shares as well as we are confident of the court ruling in our favour," said a senior SBI official requesting anonymity.

According to the official, SBI sold shares worth Rs 100 crore last week, which prompted Mallya to seek legal remedy fearing the move could jeopardise his deal with British liquor major Diageo, for which he today announced an open offer details with the exchanges.

The action by the banks, led by State Bank of India, which is the lead lender to the airline with over Rs 1800 crore dud exposure, is a big jolt to Mallya's plans of reviving the airline as well as completing the stake sale in USL to Diageo, announced last November for over Rs 11,000 crore. The UB Group spokesperson did not respond to phone calls and text messages.

The development also comes amidst the UB Group announcing the open offer for 26 per cent stake in USL to Diageo, which began on 25 March. Meanwhile, according to a filing to the BSE by UB Holdings, Diageo and its subsidiary Relay BV would acquire 26 per cent of the emerging voting capital of USL at Rs 1,440 per share that began 25 March and would remain open for the next 10 days.

Banks led by SBI decided to sell shares of USL after Mallya-promoted Kingfisher failed to repay their dues worth over Rs 7,500 crore since January 2012.

The USL shares were pledged with banks as security for loans given to the airline.

In February, the banks had decided to recall the loans to Kingfisher by selling a portion of the collaterals with them which include USL and Mangalore Fertilisers shares, Mallya's Goa vila and also the Kingfisher House in Mumbai apart from the brand kingfisher which was valued at over Rs 4,000 crore at the time of pledging it.

The move to recover dues by the SBI-led consortium comes on the heels of Finance Minister P Chidambaram asking state-run banks to take action against rich promoters of ailing companies.

"We cannot have an affluent promoter and a sick company. Promoters must bring in money... We wish banks take firm steps to recover non-performing assets," Chidambaram had said after a meeting with the bankers mid-March in the national capital.