New Delhi [India], January 12 (ANI): Showcasing photography skills for his girlfriend, Arjun Kapoor on Tuesday treated fans with a throwback picture of his Goa vacation.
Bollywood's love birds Malaika Arora and Arjun Kapoor leave no stones unturned to exhibit their affection for each other.
Recently, the 'Panipat' star took to Instagram and shared a dreamy picture of himself from his Goa vacation and teased that it was clicked by his lady love Arora.
With the scintillating picture, Kapoor noted a quote by the famous Irish poet Oscar Wilde which reads, "A dreamer is one who can only find his way by moonlight..." 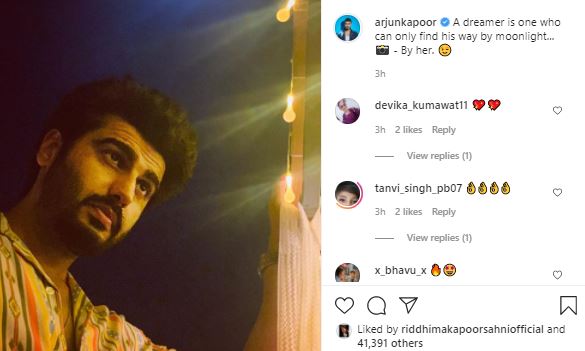 Mentioning the picture credits he wrote, "By her," with a winked smile emoticon.
The actor has been quite active on social media and has been updating fans on her activities by posting pictures and videos. Earlier, the 'Half Girlfriend' actor posted a picture channelling his Monday blues.
Meanwhile, on a professional note, actor Arjun Kapoor announced that he has headed for shooting the final schedule of his upcoming horror-comedy 'Bhoot Police' that also stars Saif Ali Khan, Jacqueline Fernandez, and Yami Gautam in lead roles. (ANI)