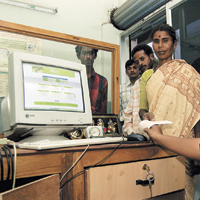 Former Prime Minister Rajiv Gandhi had famously said that hardly 15 paise out of every rupee spent by the government reached the poor. That does not appear to have changed much, although both central and state governments have been spending crores on IT projects to keep track of the money, and reduce pilferage. In the next few weeks, as many as 14 contracts for various e-governance and departmental projects worth over Rs 6,000 crore will be up for grabs. The IT industry expects to tap the huge opportunity in e-governance in social sectors, with the government planning to spend Rs 111,490 crore in FY09-10 in 25 large centrally-sponsored social schemes.

While Indian IT companies can justifiably look forward to a bonanza, so can fly-by-night operators looking to make good on the schemes that the IT projects are supposed to track. Most government IT projects to support social spending schemes end at the state level, and there is no real-time tracking of money distributed or spent at lower divisional or panchayat levels. This negates the very purpose of spending thousands of crores to undertake IT projects to track public money being spent on social schemes.

Only a few states, such as Andhra Pradesh and Bihar, have made any progress in improving the delivery channel. Most states still prefer a manual system of cash management at the disbursement level. "For most states, IT enablement is hardly a priority," says Tanmoy Chakrabarty, vice-president and head of government industry solutions unit at Tata Consultancy Services (TCS). "Bureaucracy often finds refuge in the argument that this additional outlay can also be passed on to the rural mass."

A central government survey says e-governance helped check corruption in property registration. "We may have succeeded in improving this (Rajiv Gandhi's) figure, but the collusion by bureaucracy, which also resists implementation of monitoring systems, is still an issue," says the CEO of a company that has bid for projects in three states in western and northern India.

Once implemented, states show keenness to take charge of the maintenance of these IT systems only to create further loopholes for pilferage. The biggest hurdle however is educating the user, often illiterate, to handle the myriad smart cards — for public distribution system, healthcare, education, rural insurance and financial inclusion — and to use kiosks.

For Indian IT companies, large government projects form a big component in their plans to build sizeable businesses in India (see ‘Rediscovering India', BW, 20 July 2009). Companies such as TCS and Infosys have formed separate business units for government projects. Several others including Wipro, 3i Infotech and HCL are also following suit.

For these firms, the government's plans offer great opportunity. Among major potential projects is automation of the National Rural Employment Guarantee Scheme (NREGS), through which Rs 39,000 crore will be disbursed annually. Of this, 6-10 per cent have been earmarked for administration expenses, including for IT. Automation of PDS across states, and automation of the Department of Posts could be worth Rs 6,000 crore and Rs 4,800 crore, respectively.

Encouraged by efforts of TCS in Andhra Pradesh and Glodyne Technoserve in Bihar in automating NREGS's income flow, more states are negotiating with IT vendors for Rs 300-480 crore projects to set up and manage networks that would support schemes that need a centralised database. "Most states are setting up large data centres or central repositories to supplement key operations," says Chakrabarty. Adds Annand Sarnaaik, chairman and managing director of Glodyne: "Infrastructure management alone would be a Rs 24,000-crore market annually." Yes, but will these investments help stop the leakages? Probably not.