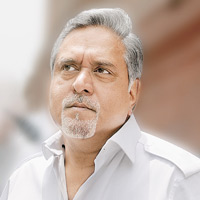 08 November, 2014
Print this article Font size -16+
Selling put options, says a Wall Street aphorism, is like picking up nickels in front of a bulldozer. In the United Spirits-Diageo deal, there are two potential bulldozers: The Competition Commission of India (CCI) and the Securities and Exchange Board of India (Sebi) that could roll over Diageo’s plan to buy a controlling stake in Vijay Mallya’s United Spirits (USL). And we are not talking about nickels and dimes in this case.
Both agencies have raised questions. The chief query being Mallya’s option to sell the rest of his holding to Diageo at a future date. A put option is the right to sell shares at a predetermined price and at a predetermined time in the future. Here is how it works. Readers will recall that in November 2012, Diageo agreed to buy 19.3 per cent of the beleaguered industrialist’s interest in his liquor company, India’s largest, at Rs 1,440 a share.
A preferential offer of shares that would take Diageo’s share in the company to 27.4 per cent (post-issue), followed by an open offer to other shareholders for another 26 per cent of the company, also at Rs 1,440 a share. The sale would leave Mallya with between 13-14 per cent of the company, which as noted above, he could sell at a future date. That is the put option.
What has evoked Sebi’s interest is that the deal documents do not specify the price at which the remainder of Mallya’s stake will be sold, but most observers believe that it will be more than Rs 1,440, and is thus unfair to minority shareholders (all that the documents say is that Diageo will have the right of first refusal on the sale of Mallya’s stake). The CCI is also uncomfortable with the preferential treatment given to Diageo, suggesting the terms of the deal are too ambiguous.
Market events have overtaken the deal too. The stock is currently trading at over Rs 1,700, almost double the level it was at when the deal was announced. Investors are unlikely to participate in the open offer in these circumstances. Diageo has said it will walk way if Sebi revises the open offer price upwards, but that is unlikely, since both Mallya and Diageo need the deal.
Necessity being the mother of invention, they will find a way to make it work.