Making Hay In The Sun 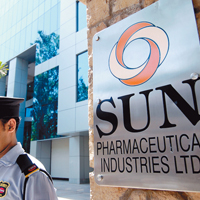 "Growth in primary domestic formulations is mismatching with secondary sales," wrote Surajit Pal, equity research analyst with Standard Chartered-STCI Capital Markets. Sun Pharma had reported an 81 per cent growth in domestic formulations sales at Rs 653 crore in the March 2009 quarter, even as the domestic market recorded a modest 11-13 per cent growth during the same period, according to pharmaceutical research firm ORG -IMS Research. Pal adds: "There is a fair possibility that Sun Pharma has sold one or two quarters of inventory ahead of schedule." This may explain the sudden 27 per cent drop in domestic formulations sales to Rs 313 crore in the June 2009 quarter (compared to Rs 430 crore profit in the same quarter previous year).

Sun Pharma, however, attributes the sharp increase in domestic formulations sales in the quarter ended March 2009, to a change in distribution policy. The company spokesperson declined to give further details on the said policy. According to analysts, the company also claimed that while the change in policy may have resulted in higher sales, recurring business growth still stood at 50 per cent for the quarter. As for the decline in formulation sales in the first quarter ending June 2009, it is merely due to "significantly higher one-time sales" in the same quarter last fiscal, says the company's spokesperson.

While the report raises concerns over the company's accounting practices, it does not question the health of the Indian company's domestic business. Sun Pharma has always adopted a niche strategy in the domestic market and established a leadership position in fast-growing and lucrative chronic therapeutic segments — such as central nervous systems, cardiovascular and diabetics — making it one of the most profitable pharma companies in the country.

Sun Pharma's domestic business now needs to more than make up for the company's dwindling US business, after the US Food and Drug Administration (FDA) took action against its US subsidiary company, Caraco Pharmaceutical Laboratories. Caraco's revenues dropped by 56 per cent in the June 2009 quarter end and the company posted a net loss of $9.4 million. As a result, Sun Pharma's net profit dropped by 72 per cent to Rs 148 crore, compared to Rs 528 crore in the same quarter last year.

The company hoped to strengthen its foothold in the US that today accounts for about 40 per cent of its total revenues with the acquisition of Taro Pharmaceutical Industries. The Israeli company has a strong presence in the US market where it earns 85 per cent of its revenues. While Sun Pharma signed a merger agreement with Taro in May 2007, it has been locked in a battle with the Israeli drug maker's promoters and some minority shareholders to take control of the company for over two years.

The company's US woes could fade if Caraco is able to resolve regulatory issues. In the meantime Sun Pharma will need to maintain a strong growth momentum in the domestic market to live up to investors' high expectations.