Making An Emotional Connect With India 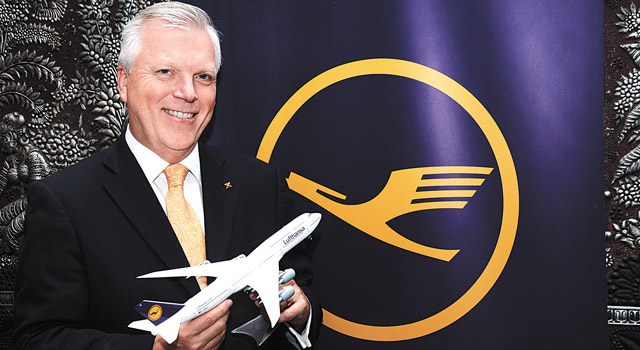 14 January, 2015
Print this article Font size -16+
People say Lufthansa has benefitted the most out of Air India’s entry into the Star Alliance...
For all Star Alliance members, Air India’s entry offers better reach and opportunity in India now. Our group, definitely, will also benefit because we will have reach beyond the metros, beyond the existing network we now have of non-stop flights from different parts of India to Europe.
Do you have any numbers post AI’s entry into Star Alliance on how it has impacted your load factor?
Lufthansa has already felt there is more demand which is directed towards us. It’s the reason we launched Airbus A 380 operations out of Delhi  in November. That gives us 140 additional seats out of Delhi. It is a daily flight and doing very well. All in all there are 520 seats, eight  in first class, 92 in business class and 420 in economy on the A-380.
You have also launched Premium Economy now – isn’t that rather late in the day? Your rivals pioneered this segment two years ago during recession.
We launched premium economy in Boeing 747 from Bengaluru on 22nd of November. We waited because we wanted to introduce a totally new segment, and not because our business class is suffering. We were reluctant to launch earlier because we were waiting till the roll-out of our new business class was completed in 2013. We didn’t want a dilution in that product. This has happened to a lot of our competitors because the difference between premium economy and business is not differentiated in their case. Our competitors positioned it closer to business, whereas we are positioning it closer towards economy. We are offering 50 per cent more space than economy, plus amenity kits, welcome drink, larger screens for entertainment systems and second bag check in. The pricing is 30 per cent more than economy. Business class is three times that of economy.
Your ad campaign playing on Indianness, how has that been received? Why didn’t you stick to your USP of German efficiency?
What was lacking in perception about Lufthansa was our emotional side. When we did an analysis of our passenger traffic out of India, we found that much more than 50 per cent were Indians. We are known among business travelers and frequent flyers, and known for our business class services. But we needed to go beyond the frequent traveler and tap the personal traveler. Especially as we were adding more economy seats – in the A380 most of the additional seats are economy. The results of a survey on our ad effectiveness show that the campaign has resulted in a growth in unaided brand awareness by 6 per cent and aided brand awareness by 7 per cent. The campaign was carried forward on a dedicated microsite. Overall web impressions of the campaign exceeded 200 million, mobile impressions over 83 million, with the video drawing in 100 million plays.The campaign has led to direct sales of over 1350 tickets.
What are the other ways you are taking on the Gulf Carriers?
By trying to grow on our own, by growing our capacity. We launched A 380 on the Delhi Frankfurt route. Next year we will launch A 380 out of Mumbai. We have also introduced a large aircraft to Chennai (a 747) recently. Yes, we have lost market share. But that’s because Middle East carriers have been able to add capacity very quickly. We get one aircraft in a month, they get 10 a week or something like that.  They have unlimited resources in terms of aircraft coming in and have to look where to put a flight. Whereas me as Director South Asia, I have to fight with my peers, to get an additional aircraft. I was lucky because India is a key market and that’s why we got A 380 and 747.
All these measures might be getting you passengers to Europe. But aren’t you losing the long haul passenger to North America – something the Gulf carriers are really targeting?
They might be giving incentives. But don’t forget we are the largest network. We have with our partner United Airlines reach to hundreds of destinations in the US. And with Air Canada we get to each and every city in North America. They have just 12 or 13 destinations in North America – nothing compared to what we can offer.  Yes, we have lost market share but there are people who have stayed loyal to us.
(This story was published in BW | Businessworld Issue Dated 12-01-2015)
Tags assigned to this article:
magazine aviation chitra narayanan magazine 12 january 2015 wolfgang will