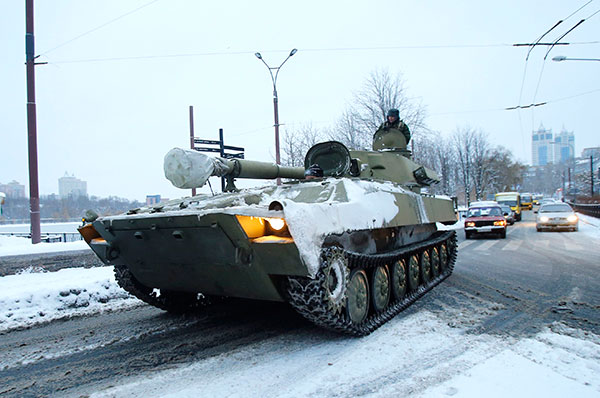 14 January, 2015
Print this article Font size -16+
In opening up defence equipment manufacture - for long a state monopoly -- the Modi government has created a $20-billion opportunity for the private sector over the next five years.

These include the hull for a nuclear submarine which L&T is building as well as transport aircraft for the Indian Airforce where the Tata group has shown interest.

Add to this the bullet proof jackets currently being tested for the Indian Army to be produced by Gujarat Forensic Science Limited and building corvettes for the navy for which Pipvav defence and ABG shipyards - both private sector firms -- are likely to bid.

This push by the private sector extends to high altitude clothing and the recently approved acquisition of 155 mm Howitzers, 100 of which will be bought off the shelf and at least 350 more made in India with an Indian firm.

There is a excitement as India, the world's largest arms importer, shifts gears to manufacture weapons at home.

Sukarn Singh, Director at Tata Advance Systems, the defence company of the Tata group, puts the opportunity in perspective, “The actual opportunities for Indian companies to manufacture weapons and weapons systems are very large. An entire ecosystem is coming together in the defence equipment market. Defence is a crucial area where make in India will play a large role.”

Prasan Firodia, MD Force Motors agrees. “With the new government’s focus on 'Make in India', the automobile industry has a great opportunity. Our products at Force Motors are capable of meeting the Defense requirements and expectations. This initiative of indigenisation is a welcome move," says Firodia.

New policies open up specific sectors as government pushes for make in India.

The last union budget allowed 49 per cent foreign direct investment in defence. While this leaves the tricky question of parting with proprietary technology unanswered - it has still led to a rush for joint ventures such as the one between Tata Advance Systems and Airbus for the tender to replace India’s ageing Avro aircraft fleet.

Sources in the Defence Ministry say that the new defence minister Manohar Parrikar is keen to get the 'Make in India' model operational in indigenous defence contracts. India has announced that the six submarines that the navy needs will now be made in India and not imported. This is a Rs 70,000-crore order but shipyard capability is for now unavailable for a project of this scale. The private sector could step in and furnish the infrastructure.

Any purchase that is above Rs 300 crore in value needs to get at least 30 per cent of the purchase order sourced from local Indian companies. This will allow for both technology absorption and built scale over time.

According to a recent report by Mckinsey, a management consultancy, offsets worth $4 billion have been awarded since the policy came into existence. With big ticket Defence acquisitions now under active consideration, offsets could growth to $10 billion within a decade.

Prof Harsh V, part of the Department of Defence Studies at King's College London, who has worked extensively on India defence industry explains, “After decades of waiting, finally it seems there is an opportunity for the Indian corporate sector to enter the defence industry in a substantive manner. So the excitement is genuine. The Modi government has given indications that it is serious about defence indigenization. It was long overdue and now that a shift from the public to the private sector is happening, it bodes well for the country. The private sector's entry is needed to make the defence sector more efficient and productive. But it will be tough road ahead for the private sector as well. ”

One factor that the private sector is counting on is increase in defence budget in the coming and subsequent years. This is likely as India’s weapon acquisition will need a planned boost in the defence budget. The military budget is at Rs 2.29 lakh crore ($38.35 billion) for 2014-15, Rs 5,000 crore more than what the previous government agreed in an interim budget earlier this year.

The Maintenance Business
Apart from producing new weapons, there is a huge market in maintenance of current weapon inventory. The armed forces are gradually opening this business up for the private sector.

Home-grown defence firms are looking seriously at the newly opened space for maintenance of military equipment which is likely to be a $5 billion a year opportunity.

The Software Opportunity
The domestic defence opportunity goes far beyond making hardware. There is a new paradigm to warfare - it’s called the revolution in military affairs. This is the warfare of the 21st century and for this software, high speed computing, advanced sensors and remote sensing are the new vistas for the private sector.

These are thought to be worth $2 billion a year and analysts believe are increasing in value.  Especially important is the role of private Indian software firms. Infosys for example has a dedicated aerospace team and is focused on developing flight control systems, flight management systems and flat panel cockpit displays for primary flight, navigation and engine information systems are also on offer.

TCS has a dedicated Aerospace excellence centre with 2000 consultants working on various projects.

The opportunity thus is being leveraged by corporate sector. Currently India imports 70 per cent of its defence needs mostly from Israel, the US and Russia. If that number can be cut even by half over the next ten years it could lead to a domestic military industrial complex and that is a multibillion dollar play.
Tags assigned to this article:
corporate mahindra and mahindra web exclusives top 2 reliance industries bharat forge punj lloyd force motors defence equipment ninad d sheth defence market tata advanced systems landt defence