Make In India: Jaitley Vows To Remove Barriers To Businesses 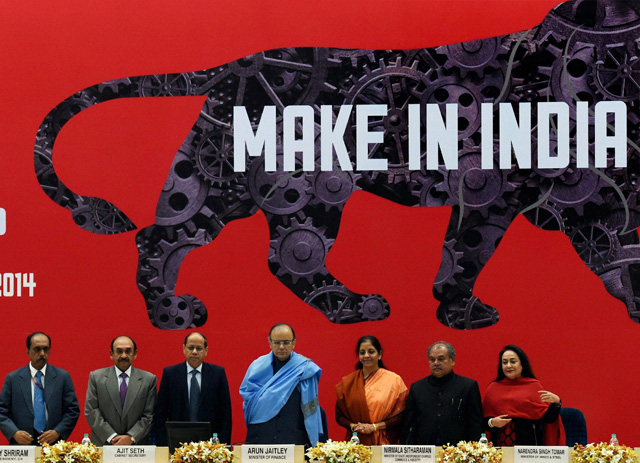 14 January, 2015
Print this article Font size -16+
The government on Monday (29 December) pledged to remove entry barriers to business and ensure a competitive tax regime to push manufacturing growth under its 'Make in India' programme, even as it blamed high interest rate for slowdown.

Criticising the monetary policy of RBI Governor Raghuram Rajan, he said high interest rate is the "singular factor" which responsible the slowdown in manufacturing sector.

"The entry point into the manufacturing sector itself has to be eased. Our initial barriers have to be lowered and perhaps even removed. If we keep the doors closed, investments won't come in," he said at a "Make in India' event.

The success of bankers' retreat with Prime Minister Narendra Modi later this week and the 'Make In India' campaign will give a fillip to manufacturing, he added.

Jaitley also rejected Rajan's criticism of Modi's pet programme 'Make in India', saying that it is about manufacturing of quality products at low costs and it was not relevant whether they are sold in India or abroad.

Earlier this month, Rajan had sounded a word of caution about the new government's 'Make in India' campaign, saying it assumes an export-led growth path of China and it should rather be 'Make for India' with a focus on manufacturing products for the domestic market.

The Governor had said he was "cautioning against picking a particular sector such as manufacturing for encouragement, simply because it has worked well for China.

"India is different, and developing at a different time, and we should be agnostic about what will work".

Stressing on the importance of domestic manufacturing, Jaitley said: "... if we lose out on cost, quality then we would be threatened with a situation where in we would become nation of of traders rather than nation of manufacturers".

GDP Growth To Be Much Better In 2015-16: Jaitley
India's economic growth is expected to pick up in the current fiscal and will be "much better" in 2015-16, Finance Minister Arun Jaitley said today.

"The last two years witnessed an economic slowdown. This year may be somewhat better, and next year will be much better," he said in New Delhi.

Indian economy was growing at over 9 per cent for three years before it was impacted by the global financial crisis of 2008. The growth rate fell to sub-5 per cent in the last two consecutive fiscals -- 2012-13 and 2013-14.

Minister of Commerce and Industry Nirmala Sitharaman said India is among the few countries for which IMF has upgraded its growth outlook. IMF in October has projected India's GDP expansion at 5.6 per cent in 2014-15.

The mid-year economic review of the government has projected that the economy has potential to grow at a much faster pace, she added.