Mahindra And Mahindra Sales Up 2% In April 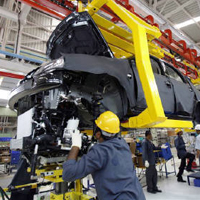 Total sales of passenger vehicles, including Scorpio, XUV500, Xylo, Bolero and Verito, stood at 20,748 units as against 20,554 units in April 2012, translating into a marginal increase.

Sales of the company's Gio and Maxximo mini-trucks and other four-wheeler commercial vehicles went up by 10.42 percent last month to 14,414 units from 13,054 units in the year-ago period, the statement said.

Commercial vehicle sales from Mahindra Navistar Automotives Ltd stood at 704 units during the month as against 1,028 units in the same month a year ago, a fall of 31.52 percent.

"We remain cautiously optimistic of the current situation and do hope that with the much awaited and needed reduction in interest rates announcement by the RBI next week, the auto industry will look up," M&M Chief Executive (Automotive Division) Pravin Shah said.

Talking about the additional duties on sports utility vehicles during the Budget for 2013-14, he said the company is "extremely disappointed that the additional 3 per cent excise duty on SUVs has not been reversed in the Finance Bill which would have brought about some cheer and momentum for SUV makers and provided them with a level playing field".