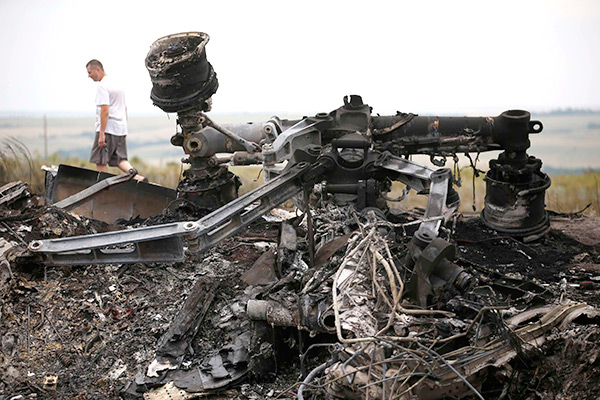 08 November, 2014
Print this article Font size -16+
World markets remained under pressure on Friday (18 July) after the downing of a Malaysian airlines jet at the Ukraine-Russia border, new sanctions on Moscow and unrest in Gaza had sent investors scurrying into defensive assets.

World leaders demanded an international investigation into the shooting down of the Malaysian plane with 298 people on board over eastern Ukraine, as Kiev and Moscow blamed each other for a tragedy that stoked tensions between Russia and the West.

Russia markets took the heaviest hit. Dollar-traded stocks in Moscow were down another 2.5 percent to take their losses for the week to more than 8 percent. The rouble, however, was up almost half a percent though it was heading for its heaviest weekly loss in more than a year.


"While Ukraine, Russia and the rebels deny any involvement or responsibility, tensions will most likely continue into the weekend," Michael Rottmann, head of fixed income strategy at UniCredit, said.

"Furthermore, Israel sending ground troops into the Gaza Strip adds to geopolitical concerns. While at current levels both Bunds and U.S. Treasury valuations look extremely rich, it is clearly not the time to position in the opposite direction."

There were, however, some signs that markets were trying to steady.

Gold dipped as buyers cashed in on some of its 1.5 percent overnight jump, while the Japanese yen and U.S. government bonds - investors' traditional go-to safe-haven assets - both gave up some ground.

European shares clawed back some of their initial falls and International Consolidated Airlines, owner of British Airways and Iberia, rose though Air France and Lufthansa were down.

US futures were also flat, suggesting some measure of stability might return to U.S. markets.

Asian Turbulence
The situation in Ukraine and the rising tensions between the West and Russia were not the only concern weighing on sentiment.

Israel announced the start of a Gaza ground campaign on Thursday after 10 days of aerial and naval bombardments failed to stop Palestinian rocket attacks.

"The general theme in the market, the predominant theme today, seems to be risk aversion. So we do expect dollar/Asia to head higher in the near term," said Divya Devesh, currency strategist for Standard Chartered Bank in Singapore.

"Whether this move will be sustained is still quite uncertain. It will depend on how the geopolitical risks unfold."

The dollar edged up about 0.2 per cent to 101.34 yen, clawing back some of its slide of nearly 0.5 percent overnight, its biggest one-day loss since early April.

The euro, which has lost roughly 0.9 percent against the yen this week, traded at 137.05 yen after reaching a five-month low and hovered near a one-month low versus the dollar at $1.3529.

In commodities trading, U.S. crude oil gained about 0.3 percent to $103.53 a barrel after jumping by more than $2 on Thursday. Russia pumps more than a tenth of the world's crude. Brent was fetching 108.25 up 1.5 percent on the week.