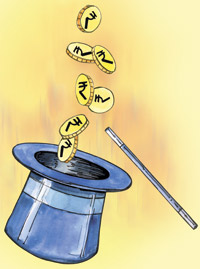 08 November, 2014
Print this article Font size -16+
In the wake of huge public money being raised through various ponzi schemes, the government has made it mandatory for new companies to give declarations that no funds would be collected without meeting the applicable norms of Sebi, RBI and other authorities.

The move follows thousands of crores worth money having been raised by numerous entities, including Sahara and Saradha group, from the public investors without approvals from Sebi and other regulators and the consequent actions against them.

The Ministry of Corporate Affairs has said that it has taken note of seriously the "recent instances of raising of monies by companies in a manner which is opaque/convoluted, non-accountable and which does not protect interests of depositors have been taken note of by the Ministry seriously".

Registrar of Companies (RoC), the first point for any entity to get registered as a company, would have the powers to seek declaration that no funds would be raised from the public without being compliant with various regulations.

According to a circular issued by the Ministry on May 29, in exercise of the powers under the Companies Act, RoC may obtain declaration/affidavits from subscribers/first directors first at the time of incorporation and from directors, subsequently whenever company changes its objects.

Declarations would be to the effect that "company/ directors shall not accept deposits unless compliance with applicable provisions of Companies Act, 1956, RBI Act, 1934 and Sebi Act, 1992 and rules/directions/regulations made there under are duly complied and filed with concerned authorities", it said.

The latest move assumes significance against the backdrop of rising instances where entities get registered as a chit fund or for some other purpose and then carry out fraudulent money pooling or ponzi schemes.

As per the recent circular, the matter of protection of interest of investors, including depositors, "is very important to ensure healthy corporate capital market environment in the country".

In the case of Sahara, funds worth thousands of crores were raised from the public without the approval from market regulator Sebi whereas Kolkata-based Saradha group is alleged to have duped investors by running fraudulent money raising schemes.

"We (Corporate Affairs Ministry) will work closely with concerned ministries and industries to remove the ambiguity in the law (related to tackling ponzi and other fraudulent schemes) as soon as possible," Pilot had said.

While chit funds laws are implemented by state governments, collective investments -- except for certain classes -- come under capital market regulator Securities and Exchange Board of India (Sebi).

Non-banking financial companies are governed by the Reserve Bank of India.

On May 31, RBI issued a public advisory asking people to carefully evaluate their decisions before depositing money with financial entities including Non-Banking Financial Companies (NBFCs).

Following the recent Saradha scam, the government has initiated a multi-pronged approach to crackdown on unscrupulous entities that raise money from gullible investors.

A Parliamentary panel besides an Inter-Ministerial Group (IMG) are looking into ways to tackle fraudulent investment schemes.