Luxury On Your Wrist 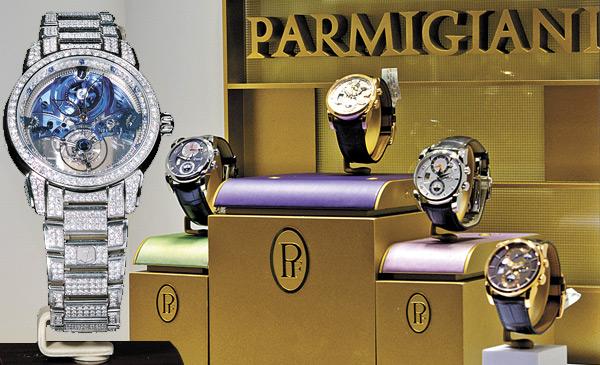 08 November, 2014
Print this article Font size -16+
It was one of those innocuous invites that drop into your inbox. Billed as a landmark event for the luxury connoisseur in India, The Circle of Time was positioned as an international haute horology show, a seven-day exposition put together by Mumbai-based retailer Rose: The Watch Bar. Among the brands that would be on display were Bulgari, Hublot, Jaeger-LeCoultre (JLC), Parmigiani and Ulysse Nardin.
One colleague suggested, “We could do a feature on watches to die for.” Another one chipped in, “Watch out (pun unintended) for brands above Rs 25 lakh.”
After a visit to the exposition I came back with a view that neither of these demands could be met — in a positive way, that is.
First, the “watches to die for” line could change to “these are watches one could kill for”. Second, the price benchmark of Rs 25 lakh suddenly seemed too low. Some of the watches on display were as expensive as an M.F. Husain or Tyeb Mehta painting. So it was apt that the location for the “circle of time” was an art gallery in posh South Mumbai.
For those who prefer art in platinum, Swiss watchmaker Ulysse Nardin had showcased the Royal Blue Tourbillon Haute Joaillerie that has, among other things, a flying tourbillon movement. The ‘limited edition’ of the watch is restricted to only 30 pieces in platinum at a price of Rs 2.31 crore. Those who believe watches to be technical works of art could look at the Ulysee Nardin Freak Blue Phantom. The watch can be yours for the taking at Rs 56 lakh. The Swiss watch maker also showcased the Safari Minute Repeater and the Triple Jack Minute Repeater.
Bulgari Saphir by specialist watchmaker Gerald Genta has a crystal domed sapphire and an 18-carat rose gold crown. The watch, with full sapphire case — front, back and even the sides — and super luminova barrels to mark each hour, comes for Rs 1.23 crore; a potential buyer will be one of only 25 people across the world to be seen with one.
Some of the watches could open doors for you; literally so, if you own an Aston Martin: the JLC’s AMVOX Transponder at Rs 19.79 lakh can actually open and close the doors of an Aston Martin.
If your loyalties lie with Bugatti Veyron Super Sport, then there is a watch that’s styled to match the contours of your sports car from the house of Parmigiani. Bugatti Super Sport, as the watch is called, is designed in two planes to match the contours of the case, and to orient the dial in the “driver’s watch” position. If the watch is laid flat, the movement is at a 30° angle. Parmigiani flips all the mechanical components of the new Calibre PF 372 onto a vertical axis, while retaining a lateral time display for the driver. The Calibre PF 372 inside the Super Sport is entirely bespoke: every part is crafted to the exact size and shape needed not only to do the job, but to create a whole design for the timepiece. You buy the car for Rs 17 crore, and the watch costs around one-tenth of it.
If you are keen about Formula One racing, you could try the Tourbillon F1 by Hublot that comes with a price tag of Rs 1.04 crore. For soccer fans, there is a piece of Manchester United in the form of a limited edition Hublot at Rs 21.4 lakh that has real grass from the Old Trafford football field cast into the dial. And no, you don’t have to buy a lawn mower as an accessory!
Hublot, the masters of fusion between the traditional and futuristic through design, knowledge and materials, showcased an array of watches including Hublot Big Bang Vendome Tourbillon and Vendome Gold Tourbillon.
JLC displayed the Master Compressor Extreme LAB 2 that’s best suited to extreme conditions and is the preferred companion of adventure seekers. Priced at Rs 31.42 lakh, it was worn by climber Stefan Schafter to the summit of an unconquered Himalayan peak, subsequently named Mount Antoine-LeCoultre. The JLC Ultra Thin Reverso Tribute 1931 is, as the name suggests, a tribute to polo players from the days of the British Raj. Legend has it that to avoid cracking or even scratching the case of their watches during a tough game of polo, the players could simply reverse the case of the watch. Talk about protection from the vagaries of time.